You may have noticed a post on our calendar letting you know that this Saturday, DARN! (Downtown Action Revitalization Network) is encouraging Kingstonians to make their way down to Vandervoorts to make a purchase (any kind of purchase – if you’re not in need of tools, toys or housewares, I hear the gelato is really good!)  DARN’s vision is to create and maintain a vibrant and welcoming downtown Kingston and to foster an inclusive sense of community and commerce as well as a walkable and bike friendly place where all of us can share a sense of belonging.  Vandervoort’s is a great example of a locally owned business that has had staying power in our downtown core.  Below is an article written by Lea Westlake, a parent and teacher who has lived in downtown Kingston for the past 12 years.

Vandervoorts has been part of the downtown streetscape since 1947 when Claude and Dean Vandervoort took over the business from the Elliot Brothers. The Vandervoorts died young and the business changed hands in 1963 when 6 people took over and operated the store until 1983. Some of these people were relatives of current day owner Bill Dalton. When the 6 were unable to make a go of things and the store was about to liquidate, the 23 year old Bill returned from where he was working in the States with an offer to save the store. The young upstart was “laughed out of the water”. He turned around and asked George Vosper to make the same offer on his behalf and it was accepted. Bill has owned and run the store ever since. 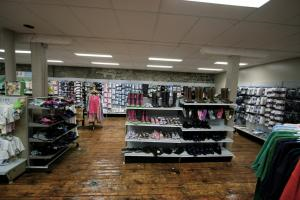 Last year, I had a conversation with Bill over the paint counter that made me fear for Vandervoorts future. He said that he would give the General Store idea a year and if it didn’t work, then he would have to consider other measures. It seems to be working.

Just to remind all you downtowners what is available at Vandervoorts, let’s take an imaginary walk through the store. Open the door and you are met with great old wooden floors and limestone walls as you enter the houseware and small appliance section. More recently seasonal merchandise has been added up front around Hallowe’en, Easter and Christmas. In the summer, you can get ice cream and tomatoes. If you continue though, you can pick up some great things for the garden before you enter the paint section on your right. They stock Para and Linda can tell you anything you need to know about paint. On the left side of the store is an expanded linen section which stocks sheets, shower curtains, table linens and some absolutely beautiful bamboo towels. Keep on going and you hit what used to be hardware section of the store. It is now the toy section. Here, you can feel the influence of S&R and get many of things you used to get there. For those of you worried that the hardware section is gone—its not. It has been expanded at the back of the store. Nuts, bolts, lightbulbs, mouse traps, door mats and duct tape are yours to be had. The marine hardware department has moved upstairs along with the newly opened clothing section. Vandervoorts now sells socks and underwear for the whole family and children’s wear from infant to size 6. 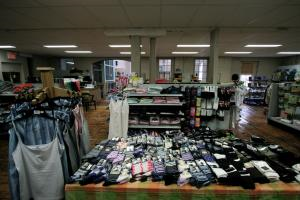 With S&R closed, Vandervoorts remains one of the last stores where you can buy the stuff of life. Don’t get me wrong—I like having restaurants and high end clothing stores downtown, but one also needs to be able to get the “nuts and bolts”. Vandervoorts is the place to do just that. Where else can you buy tomatoes, radar for your boat and underwear at the same time?