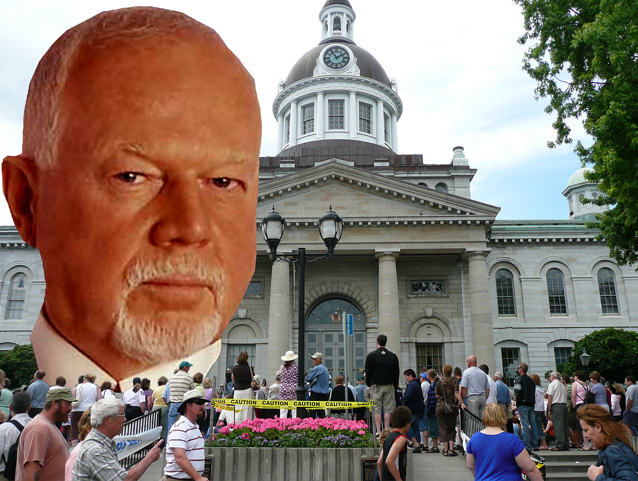 Wawa is home to the largest Canada Goose, while Vulcan has the U.S.S. Enterprise, Ottawa has a spider, and Beardmore has the world’s largest snowman.  And the list goes on.  Save for the modest-sized misshaped hockey puck at Kingston’s International Hockey Hall of Fame, the Limestone City is noticeably missing from the list of destinations with freakishly large tourist traps.  Since tourism provides year-round economic stimulus to Kingston, we can’t afford to ignore the popularity of large roadside attractions for much longer.  After briefly brainstorming some of the possibilities, I believe that I’ve come up with a solution.  What if Kingston was home to a humongous bust of our outspoken hockey ambassador, Mr. Don Cherry?

Whether you like it or not, Kingston was, is and will continue to be a city that just can’t get enough hockey.  With the K-Rock Centre, Invista Centre, M-Centre, Wally Elmer, Harold Harvey, Centre 70 and Cataraqui arenas, there’s no shortage of facilities for year-round, on-ice action.  During the winter months, city parks and Market Square come to life with skaters who bundle up, brave the cold, and take in a recreational skate on one of our outdoor rinks.  Hockey enthusiasts come from near and far to celebrate our nation’s favourite past time with local spectacles including Feb Fest, the Limestone Classic, and the historic Carr-Harris Cup.

Kingston’s hockey legends include the likes of Don Cherry, Doug Gilmour and Kirk Muller, while new talent including John Erskine and Kip Brennan help keep us on the hockey map.  Although we haven’t captured the illusive title of “Hockeyville”, a large-scale shrine would definitely add to our hockey cred.  That said, one could easily argue that Grapes’ over-the-top, on-air ego does not need to be inflated by honouring him with a 50 foot bust.  Further, his ridiculously controversial comments regarding everything from French Canadians, Russians and hockey violence, do little to justify a massive roadside monument.

But for every Don Cherry hater, there are at least two people who have a special place for him in their heart. When it comes down to it, the subject of large roadside attractions don’t have to be popular, or even proper.  In that respect, I am sure that the creators of dinosaur monuments in Millgrove Park and Mattice did not take into account the fact that dinosaurs are not recognized by certain religions.  Further, niche attractions such as the U.S.S. Enterprise are surely only appealing to a select few.  Regardless, these massivie landmarks get noticed, and with an oversized personality such as Don Cherry, Kingston would too.

4 thoughts on “What if Kingston…”