Twice a month our loyal followers tune in to Twitter to catch #ygkc, a play-by-play (tweet-by-tweet) of the proceedings inside City Hall’s council chambers. This past year, City Council meetings went on a mini-road trip, as they were hosted at various venues around the Limestone City, while Council Chambers were being renovated to provide for much-needed technological upgrades.  Although criticized for being dysfunctional at times, drama played out as our City Council debated issues ranging from casinos to bike lanes, electoral boundaries to ethics commissioners, and everything in between.  Recognized as the first to offer live streaming video of Council Meetings, #ygck is made possible by the tireless efforts of Tommy Vallier, our dedicated resident expert on local municipal politics.  His regular Hall Monitor series included this featured piece on the recent turmoil regarding the OMB ruling on electoral boundaries and supposed conflict of interest.  Stay tuned in 2014 as we watch how this local political drama will unfold.
——————————

Hall Monitor: Late to the Party 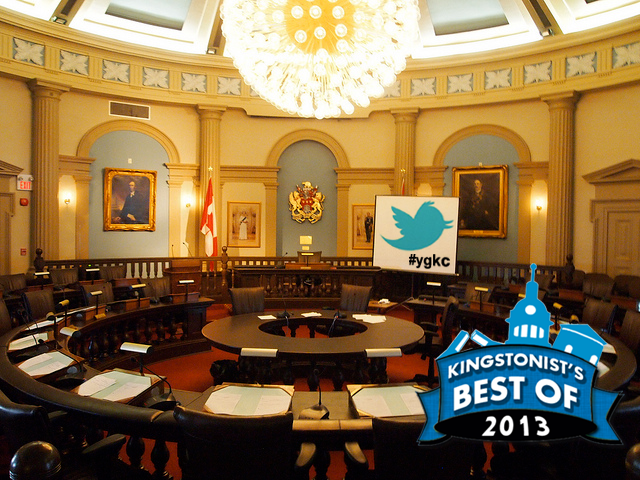 Our meeting last night was, for the most part, a quick one – clocking in at just about an hour and a half. Very little major “meat” to the main meeting, too; with council passing some changes to penalties to false fire alarms, changing some of the way the solid waste by-law is worded with respect to garbage on snow drifts, discussion on mayoral portraits or paintings, new committee appointments and some discussion on the city’s projected population growth. There was a motion, too, asking staff to review commercial zoning rules for Kingsotn East. The excitement, really, happened behind the closed doors of the upstairs “in-camera” meeting, which caused the meeting to start about one hour and 18 minutes late.

Normally, when council meets behind closed doors, they don’t report; but last night, they did. Specifically, they reported publicly to take a vote to hire in George Rust-D’Eye, of Toronto, as an Integrity Commissioner to look into conduct during the recent OMB hearing. Councillor Glover excused himself on a pecuniary interest – suggesting that he would be the target of that investigation and that the outcome could cost or earn him money – and the vote carried 8-4, with Councillors Downes, Hutchison, Neill and Osanic opposed. That’s all we’ll hear about this until the new year, I’d imagine.

Our complete Tweet stream is below. We’re into the last year of this council’s term, so report numbers have reset and meetings are now being dated 2014. Their next meeting is December 17th.