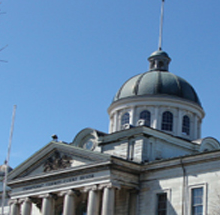 A convicted sex offender is fighting his extradition to the U.S. because, he claims, the manner in which Kingston Police obtained and shared evidence against him violated his Charter rights.

The U.S. government has requested that Gregory Hibbert be extradited to Memphis, Tennessee to face prosecution of charges related to making child pornography in the U.S., following his conviction for related charges in Canada. Hibbert is fighting his extradition on the grounds that evidence upon which the American prosecution will be founded was obtained in Ontario by Kingston Police in violation of his rights under sections 7 and 8 of the Canadian Charter of Rights and Freedoms.

In July 2016, Hibbert was arrested in Kingston, initially on one charge of voyeurism. At the time of his arrest, Hibbert had been visiting a long-time friend in Kingston with whom he had, at one time, been briefly involved in romantically. The friend whom Hibbert was staying with in Kingston had a seven-year-old daughter.  Court records state that one day, while Hibbert, his friend and her daughter were out, the child’s father stopped by the residence and during the course of doing so, used the bathroom.  He noticed a waterproof clock radio hanging from a towel rack facing the toilet and shower.  Thinking it odd, and examining the device further, the man noticed that two holes had been drilled in the casing, one of which harboured what appeared to be a lens.  He subsequently dismantled the radio and found a camera hidden inside.  He told his daughter’s mother about his discovery and together they searched out additional electronic devices.  They then called Kingston Police and invited officers to enter the premises and handed over to them the equipment which they had found. Kingston Police obtained a warrant to search the devices which had been handed over. A number of images were found, including recordings of the child in the family bathroom and her bedroom while bathing, dressing and undressing, and using the toilet.

Several other images were found, some of which were determined to be related to a visit Hibbert had made to friends in Bowmanville immediately before his visit to Kingston. While there, he had recorded an elementary school-aged girl and her younger brother taking their bedtime showers. The search of Hibbert’s devices also disclosed electronic images of child pornography involving the young child of the friends who he had stayed with in Tennessee. Kingston Police shared these images with U.S. investigating authorities and this ultimately led to the parents of the Tennessee child confirming that the images were of their child.  The American charges relate to that visit which Hibbert had made to those friends in Memphis, immediately before he visited the friends in Bowmanwille.

Hibbert was arrested on the 27th of February 2018, pursuant to a warrant issued under the Extradition Act.  At that time. he was in custody, serving a three year sentence imposed following his guilty plea and conviction in Canada on the 30th of August 2017.

In his Superior Court Of Justice application fighting the extradition request, Hibbert alleges that the “informal” sharing of evidence by Kingston Police of his conduct in Canada was illegal and improper. He states that such “informal” sharing of evidence – with the intent of using Canadian-gathered evidence in the United States by American officials for the sole purpose of prosecuting him – is a breach of his Charter rights, and that the non-consensual, warrantless search of his private room in the Kingston residence that he was staying at, as well as the subsequent warrantless search and seizure of his personal belongings, was also illegal and a breach of his rights.

Hibbert also claims that he was arrested and then subsequently questioned without being comprehensively advised of the full extent of the jeopardy he was facing, including the intended use of his statement and evidence in the United States by American officials for the purposes of prosecuting him. Hibbert states that he had made his guilty plea made without fully knowing of the complete jeopardy and of all of the possible consequences that he was facing, in particular of the possibility for extradition to the U.S. and the intended use of Canadian-gathered evidence in the United States.

In his application, Hibbert asked that all evidence gathered be excluded in the proceedings, or alternatively, that a stay of the U.S. extradition application be ordered, or, failing these, that his guilty plea in the Canadian proceedings be struck down.

The judge declined to overturn the guilty plea in the Canadian proceedings, but did allow the claim that the evidence-sharing was illegal and improper to proceed.

“Unless Mr. Hibbert can show that his guilty plea in the earlier proceeding was not voluntary, unequivocal and informed, there would be no basis for it to be set aside,” said judge J. Graeme Mew in the court decision. “The later determination of an issue that might have been raised by Mr. Hibbert in his Canadian proceedings does not suggest that his plea was not properly informed…Furthermore, as a practical matter, Mr. Hibbert has all but completed his sentence arising from the Canadian proceedings. The record discloses no plausible basis upon which this court could or should set aside his guilty plea and order a new trial.”

Hibbert’s lawyer will be applying for bail while court proceedings are ongoing.