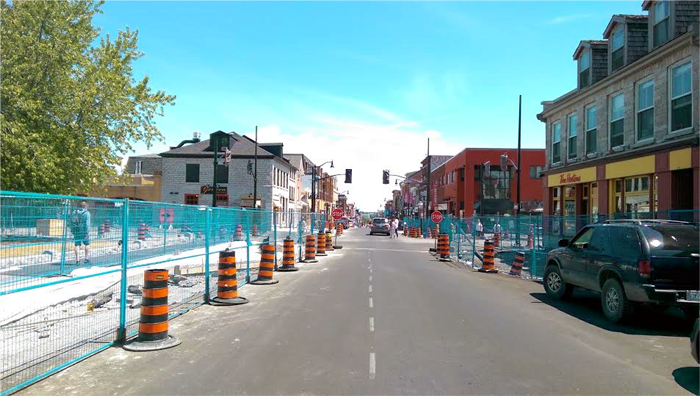 The arrival of July 2016 marked the official conclusion of phase three of the Big Dig, or so we thought. The latest round of the multi-phased construction project to replace and upgrade antiquated sewer infrastructure and utilities began this past January, targeting the section of Princess between Bagot and Clergy.  With an estimated price tag of $12.9 million, the disruptive but essential project aimed to have our downtown’s main thoroughfare back up in running in time for Canada Day.  When the construction fencing opened in time for the Red and White Parade on July 1st, Kingstonians breathed a sigh of relieve knowing that the worst of phase 3 of the Big Dig was mostly behind us.  Three weeks later, we continue to endure the application of finishing touches, and are reminded of a few notable businesses who did not make it through.

The number of closures, vacancies and relocations along lower Princess Street was at an all time high last summer as businesses prepared for phase three of the Big Dig.  Similar to previous rounds of Big Digs, phase three resulted in, or at the very least contributed to, the demise of a handful of downtown businesses.  Closing a portion of the street turned off the tap of consumers transiting not only the construction zone, but also to the segments of Princess Street above and below the affected area.  While it’s impossible to know just how much of an influence Big Dig had on the collective bottom line of our downtown, I think it’s safe to assume it contributed to a number of closures.

Mourning the disappearance of beloved businesses from downtown Kingston, this week’s poll asks:

Which business closure is the most significant for downtown Kingston?

Stepping back to examine the situation, you’ll notice that theses losses are largely restaurants and cafes, most of which were independent operations save for a pair of franchises.  Does that mean that Kingstonians were less likely to frequent downtown eateries during the Big Dig, that the restaurant market was over saturated to begin with, or that retail businesses were better prepared to weather the storm?  Perhaps a combination of these factors is more accurate, with due consideration for the unique challenges faced by each business.

It’s also imperative to recognize that, although downtown Kingston shed over half a dozen businesses during the third phase of the Big Dig, many of the vacancies created by the closures listed above already have new tenants, and in some cases these businesses are now up and running.  That’s all to say, it’s unfair to focus on the negative impact the Big Dig has had, as exciting new development (e.g. Balzac’s, Barcadia) are a sign of rejuvenation.

Of the businesses downtown Kingston bid farewell to during phase 3 of the Big Dig, which one will have the most significant impact and why? Share some love for your favourite former downtown fixtures below.