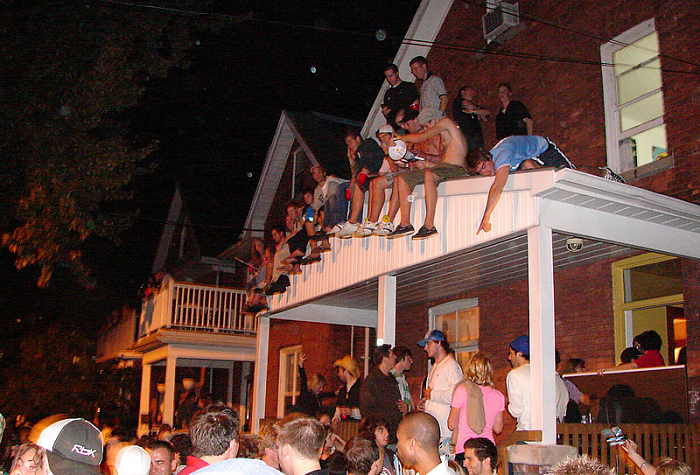 Another St. Patrick’s Day is behind us and, according to Kingston Police, things went relatively well. Despite the hundreds of green-clad, beer-drinking students who filled Aberdeen Street Friday afternoon, the day went off without any unexpected mishaps. Some fines were given out for drinking in public but no one was arrested, and most importantly, no one was seriously hurt.

The Kingston Police see their primary role during festivities like St. Pat’s and Queen’s Homecoming, as crowd control. These parties have been going on for over a decade now, and with so many underage students now at Queen’s, these gatherings are even more populated since they can’t get into the bars. Instead of trying to break the party up – which can lead to more trouble – the police focus on keeping people safe in a controlled and friendly environment. One thing they can’t enforce is people drinking on their own property – even if they’re sitting on their rooftop.

“Brewfing” is a relatively new term that describes the act of drinking while sitting on the roof of your porch or even higher up on the peak of your house. While the term is new, people sitting on their roof when the warm weather returns has been a common site in student neighbourhoods for as long as I can remember. Of course, there are many dangers associated with brewfing. Slanted roofs are not a great place for solid footing for the most sober person, making it very easy for a slip and fall that can cause serious harm. In addition to the dangers of falling, roofs are designed to hold a certain amount of weight from snow but are certainly not meant to hold 5-10 (or more) young adults. A quick Google search of the words “porch collapse” gives a chilling reminder of the possible outcomes. While brewfing is not illegal, it is definitely a practice that should be discouraged, but Kingston Police have no way to enforce it. Enter the idea of creating a new by-law prohibiting these kinds of gatherings.

Kingston City Council, along with other Ontario cities who face the same issue such as London and St. Catherines, is considering enacting a city-wide nuisance by-law that would cover the act of drinking on a roof-top. While the sentiment behind the by-law is to ensure people’s safety, there is a lot to question about whether city hall has a right to govern private gatherings. This week we want to know:

Perhaps a better approach to dealing with brewfing and other dangerous practices is to have more discussions with students about drinking in general and how to do it responsibly. Landlords need to take some responsibility here as well. Many of the houses in student neighbourhoods in Kingston have been broken up to create as many bedrooms as possible to maximize a landlord’s monthly take, but these kinds of conversions result in houses with very little to no indoor gathering space. Requiring a certain amount of common living space in these homes might help reduce the number of not only roof parties, but outdoor parties that spill onto the streets in general.

It’s a sticky situation. While we don’t want every move we make to be governed, we also have to accept the fact that piling a dozen people onto a roof is not good common sense, and there doesn’t seem to be any sign of this trend stopping anytime soon. What do you think? Does the city have a right and/or a responsibility to deal with brewfing through the introduction of a new by-law, or do they need to step back and let the police and property owners deal with it on an individual case-by-case basis? Have you brewf’d? Tell us your experiences, good and bad.

Thanks to actionhamster for today’s photo of Queen’s Homecoming on Aberdeen Street.