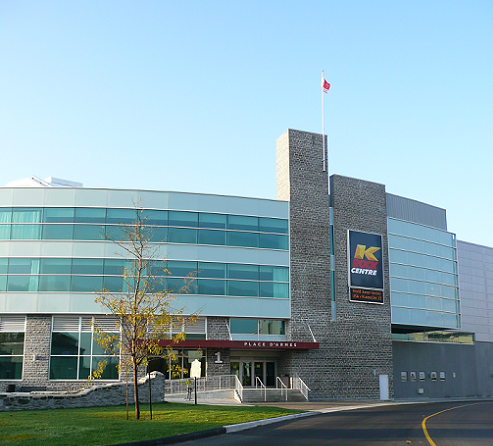 When we launched Kingstonist late last February, it coincided with the grand opening of the controversial K-Rock Centre. At the time, the Krock was all the rage amongst Kingstonians, but I didn’t want Kingstonist to turn into an LVEC-centric blog, reporting about each and every little thing that went right/wrong with the money pit. In my mind, that’s what Kingston Concerned about the LVEC (KCAL) was for, although updates on that site unfortunately stopped a while back. In my biased opinion, Kingstonist has done a decent job reporting on a few events at the KRC, without making it our prime focus. Today however, I wanted to draw your attention to a minor detail about the LVEC that should not go unnoticed.

I was walking by the K-Rock Centre last week, when I noticed a few folks from Eskerod Signs unloading some large billboards along Barrack Street. I was excited to see what sort of marquee they’d come up with to advertise the goings on inside the KRC. In the past, a video projector on the Barrack Street side has blasted the K-Rock logo on the side of the arena, but that was obviously only a temporary solution.

In the end, three signs were plastered to the side of the Krock. Two identical signs were placed at opposite ends of the building, one facing Place d’Armes, and one facing Barrack Street. These signs give clear K-Rock brand recognition, and they advertise upcoming events via an LED sign at the bottom. The third sign is a longer LED board, which also announces events such as Barney on Ice, Tom Jones etc… 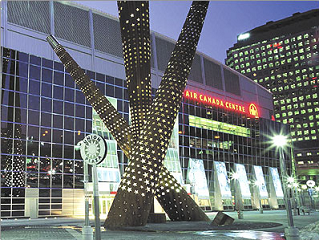 Although I think that these finishing touches are well needed, and long overdue, I must say that I am rather disappointed with the result. The huge square billboards are rather generic, albeit easily changed down the road if K-Rock no longer wishes to hold naming rights. In my mind, the centre should have something similar to the ACC where each letter of the sponsor’s name, as well as the logo, are lit up and affixed to the facade. Although I applaud the effort to advertise events, I think that the LED signs look junky, and almost old school. On the other hand, had they taken the time to make the signs look great, it would probably end up costing us even more. Check them out from more angles in our new Flickr set.

2 thoughts on “Blinded by the Light”