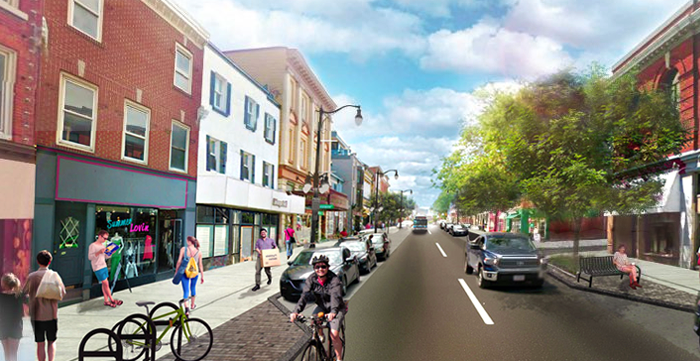 It seems like it was just yesterday when we were patting ourselves on our backs for enduring yet another round of the Big Dig, downtown Kingston’s multi-phased construction project to replace aging sewer infrastructure and utilities below Princess Street.  We reluctantly got our first taste of the big dig in 2010, with phase one ($4 million), which tore into Princess from the Holiday Inn to King, as well as along King from Brock to Princess.  After a well-deserved break, we embarked on phase two ($6.5 million) in 2013 with more realistic expectations regarding how the next stretch of Princess, from King to Bagot, would be affected.  Succeeding yet again, we enjoyed another hiatus from road closures, detours, and subterranean digging, but of course, it was only a matter of time until the next phase would be upon us.

As Kingston rang in the New Year, construction equipment was being pre-positioned in support of phase three (est. $12.9 million), which is tackling Princess from Bagot to Clergy, including the immediate intersecting streets. A proposal by Utilities Kingston would have expanded phase three all the way up to Barrie, however extended timelines and budget constraints resulted in this being labelled a non-starter.  Interestingly enough, in January 2015 there seemed to be an appetite for increasing the scope of phase three, as many preferred the move to increase our short term pain, rather than continuing to inch along three blocks at a time.

The impact on local businesses is often cited as the most significant negative aspect of the Big Dig, and for good reason.  Although we may never know the exact number of businesses that were forced to close by previous iterations of the Big Dig, we can glean some insight from the number of vacant commercial storefronts, recently deceased and new life along Princess Street dating as far back as 2009.  In short, those figures suggest that there are more vacancies and more businesses on the move than ever before.  With your personal shopping habits in mind, this week’s poll asks:

Which aspect of Big Dig has had the greatest impact on how often you shop/frequent downtown?

The tipping point for any business is sensitive, therefore even the smallest uptick in the number of consumers staying away from downtown will affect profitability.  During the best of times we hear routine complaints from people who moan about not being able to find a parking spot directly in front of their destination. So it should come as no surprise that the inconveniences stemming from the Big Dig have soured more than few shoppers.  With construction workers doing their darnedest to help shoppers navigate through the maze of fencing, and a few businesses offering Big Dig discounts/promotions, what else can be realistically done to minimize the negative affects of this ongoing project?  Can we change the mindset and ultimately the habits of the precious few who have abandoned downtown Kingston just because of a little construction?