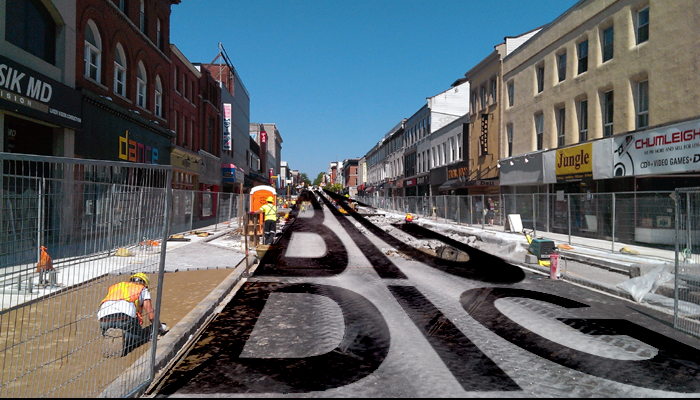 Kingston is often revered for its historical charm, and yet that same appeal is widely cited as a source of serious headaches in the oldest areas of the city.  For decades, downtown Kingston’s business and property owners have had to contend with the ancient sewer and utilities infrastructure lurking below street level.  Significant problems ranging from the horrible reek of sewer to costly flooding during extreme downpours helped justify the Big Dig, a multi-phase massive construction project undertaken to upgrade what lies beneath our downtown’s main thoroughfare.  With phase one completed in 2011 and phase two realized in 2013, the stretch of Princess Street from Ontario to Bagot has endured months of excavation and upgrades in order to bring subterranean infrastructure up to modern standards.  Moreover, this swath of our downtown has also benefited from more visible, aesthetic upgrades including granite curbs and flower boxes, as well as new street lighting, benches and bicycle racks.  With a price tag in excess of $10-million, few would argue that the cost to bring downtown Kingston into the 21st century is not justified, however this ongoing project is not without its critics, nor have downtown businesses been left unscathed.

Last week, the City of Kingston approved a half-billion-dollar budget for 2015, which included funds for capital projects such as the next phase of the Big Dig.  With details of phase three emerging, we’re now getting a clearer picture of just what’s in store for the next round of renovations, while those details may be cause for concern.  Phase three of the Big Dig targets the same amount of real estate as the previous phases, a 3-block segment of Princess Street that spans from Bagot to Clergy.  What is more, there’s an ambitious proposal to continue up to Barrie, which would see this stretch of downtown Kingston under the knife for an entire year – far longer than the previous two phases.  Aside from the mess and inconvenient vehicle and pedestrian detours, the most significant burden of the Big Dig is the impact it has had on local businesses whose storefronts fall within the construction zone.

While it is impossible to ascertain just how much money local businesses lost during the previous phases of the Big Dig, and just how many businesses were forced to close up shop as a result, the fact of the matter is that phase one and two likely contributed to numerous closures.  This fact is not lost on those who will be affected by phase three of the Big Dig, and it has many business owners questioning why so much work has to be done all at once.  Some have called for phase three to be kept as-is, broken up further, or otherwise for the city to step up and spend more in order to ensure that the affected area of Princess Street is out of commission for a shorter duration of time.  Accordingly, this week’s poll asks:

What changes to phase three of the Big Dig should the city consider?

Should the city of Kingston heed the warning of local business owners in order to minimize disruption and the possibility of numerous store closures?  Would you be in favour of reducing or even forgiving property taxes for those affected by phase three with the hope that it would have a positive, trickle-down effect benefiting businesses?  Or, are you of the opinion that patrons are already familiar with navigating downtown during major excavation, that one continuous year of construction is better than ten and that business closures are inevitable, regardless of the Big Dig’s location and duration?

One thought on “Reconsidering the Next Phase of the Big Dig”