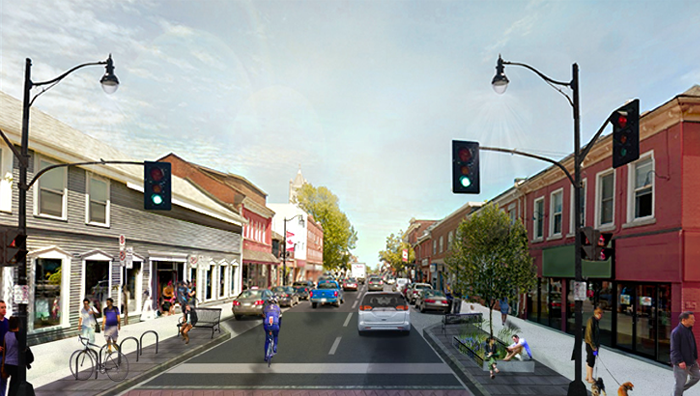 The massive, multi-year construction project to replace aging sewer infrastructure and utilities below Princess Street entered its forth and final phase early last month. Downtown Kingston’s so-called Big Dig first broke ground back in 2010, with phase two completed in 2013, and phase three wreaking havoc in 2016.  Once complete, over $36-million will have been poured into the project, which includes an estimated $13 million to complete the current phase tackling the section of Princess between Division and Clergy.  Of course that hefty price tag doesn’t include intangibles such as commuter pains, and business losses.

The negative effect that the Big Dig’s road closures, pedestrian detours and noisy construction have had on businesses along lower Princess Street has been well documented.  With each previous stage, we’ve witnessed an uptick in commercial vacancies, stores forced out of business and businesses relocating just to get out of the eye of the storm.  Although the exact number of each is hard to define due to a host of factors, suffice it to say the Big Dig has left a dirty mark on downtown Kingston’s business landscape.

With the end (finally) in sight, we want to know:

What aspect of the Big Dig will you remember the most?

The forth phase of the Big Dig may only address a two block section of Princess Street, but one of those blocks is arguably the busiest section of the entire stretch that’s gone under the knife to date.  Specifically, the section of Princess between Division and Barrie, better known as the Hub, is a popular late night destination.  Of course, the confluence of alcohol, narrow gangways, construction fencing and deep pits is expected to cause problems.  Safety concerns will reportedly be addressed by hiring additional security in proximity to Alehouse, Stages and The Brass, but will such measures be enough?

Don’t get me wrong, the end result of the Big Dig will undoubtedly be worth it.  Gone are the days of businesses flooding due to excessive rain.  And our main drag will finally have a unified, modern look and feel that’s more pedestrian friendly.  Even so, I can’t help but feel for the likes of Dino’s, Mexico Lindo Y Que Rico and Barcadia, all of whom will need a little bit extra love from patrons as they endure the next 5 months of the Big Dig.

One thought on “Big Dig Phase Four: The End Is In Sight!”