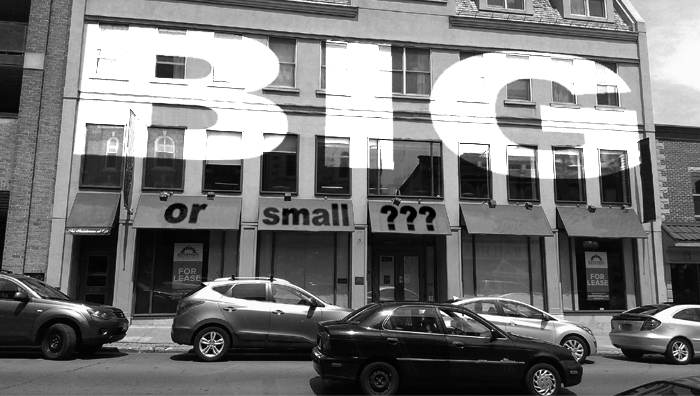 Over the years large retail stores have played an integral role in downtown Kingston’s appeal to shoppers. In fact, not too long ago the likes of S&R, Zellers, Modern Furniture, Indigo and Downtown Kingston Sports reigned supreme as hulking retail anchors along Princess Street, attracting droves of customers and resulting in spin-off sales for smaller neighboring businesses. But as the retail industry evolved and online shopping established dominance over brick and mortar outlets, downtown Kingston bid farewell to these large retailers one after another.

In 2017, downtown Kingston still has a handful of large(ish) retailers left, namely The Gap, Urban Outfitters, Trailhead, Staples and James Reid. A key trend amongst this list of dissimilar businesses, is that each of them sells a particular type of merchandise (e.g. clothing, outdoor gear, office supplies and furniture). That may not seem like a significant detail, however if you compare these stores with the likes Zellers and S&R, it suggests that the one-stop shopping experience offered by traditional department stores isn’t sought after by shoppers who frequent downtown Kingston.

The benefits that go hand in hand with larger retailers were recognized by City Council who approved a key update to the Official Plan last March, which opened the door to big box stores in downtown Kingston. The update specified that:

…large format retail uses are permitted provided that the built form is compatible with the historic building fabric, scale, pedestrian amenity linkages with the lake.

Over half a year later, no new big box business have set up shop downtown. Is it simply too soon to tell, or is the fate suffered by so many others keeping businesses away? Moreover:

Do you picture more big box stores in downtown Kingston?

The realization that downtown Kingston may be a tricky place for a department store, or any big box store, to set up shop is an important one for those looking to fill the largest commercial vacancies along Princess Street. Indigo’s former location has remained empty since their closure in 2013, while new vacancies caused by the closure of American Apparel and the consolidation of Scotiabank are also ripe for redevelopment by big tenants. Even so, these spaces can just as easily be subdivided into smaller commercial properties, which when rented out at premium rates, could be even more advantageous for landlords.

Do you foresee box retailers and/or department stores opening up in downtown Kingston in the foreseeable future? Or, do you envision something a little more balanced and similar to the status quo? What will the size of stores along Princess Street end up like in 10 or 20 years?