When The Ontario Lottery and Gaming Corporation (OLG) announced its plans to open up the provincial gaming industry to private sectors, the City of Kingston took immediate action by bringing the idea to council and creating a survey allowing Kingstonians to have their say.  The debate is ongoing and has sparked some very convincing arguments both for and against the casino.  Some believe that the new facility could create jobs and more tourism, while others argue it will only add more crime and bring further social issues to our city.  The debate continues…
—————————— 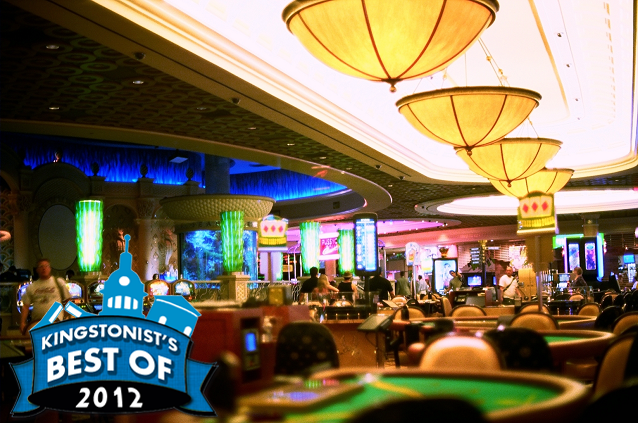 Should Kingston Roll The Dice?

If you’ve been paying attention to City Council, or even just watching your Twitter feed, you’re likely aware that the City is asking residents to weigh in on the possibility of the Ontario Lottery and Gaming Corporation (OLG) establishing a casino in Kingston. OLG is opening up the provincial gaming industry to private sector operators beginning this Fall and is looking to see if there is any interest in new markets. The City has created a survey of eight questions for the purpose of gaining feedback from Kingstonians. According to OLG’s regulations, only one casino can exist within the E3 gaming zone, which includes Gananoque and Leeds and Grenville United Counties. This means that if Kingston shows interest in a casino, and it is supported by OLG, the Gananoque casino could close and a new facility would be established in Kingston by a private developer.

Of course, the survey is private so it is hard to say where we stand at the moment. Arguments have been made for and against. We thought it would be interesting to ask the question too, to give us a better idea of what people are thinking about this, and to hopefully get a good conversation going on the topic. Accordingly, this week’s poll asks:

Do you want Kingston to have a casino?

Many arguments have been made for having a casino in Kingston. It will create jobs and bring in more tourism, generate more funds, and for many of us, it would be fun to have a casino a short walk or ride away. But the negative effects of a casino are also being considered: the great parking debate rears its head, as does concern for the “party culture” a casino could create (or accentuate). A more important argument, in my opinion, is regarding the social issues that a casino brings with it. Can we afford the very real possibility of over-indulgence? What kinds of programs are in place for gambling addicts in Kingston, or in Gan for that matter? I also have to question how neighbourly it is for Kingston to take away Gananoque’s golden goose, especially considering we’ve passed up this opportunity once before.

I do enjoy casinos and it would be fun to have one nearby, but I’m not sure Kingston as a whole can handle it, nor do we need it. We would love to hear your thoughts on this issue and, if you haven’t already, please be sure to let the City know too by filling out the survey. You can also take the survey over the phone by calling 613-546-6000 and there will be a public meeting to receive feedback at 6:30pm on August 8th in Memorial Hall.

Thanks to Adam Freidin for today’s pic.