My disbelief regarding the decision to close down Kingston Penitentiary has led me to adopt the mentality that I’ll believe it when I see it.  The prospect of mothballing Canada’s oldest jail, an institution that is so intimately tied to Kingston’s storied past, is difficult for many of us to fathom, especially in light of the supposed political motivation and severe lack of justification behind the decision.  As the most talked about headline from 2010 was the abrupt termination of the Prison Farm program, it should come as no surprise that our readers voted KP’s unceremonious retirement the most significant story to surface in Kingston in 2012.
—————————— 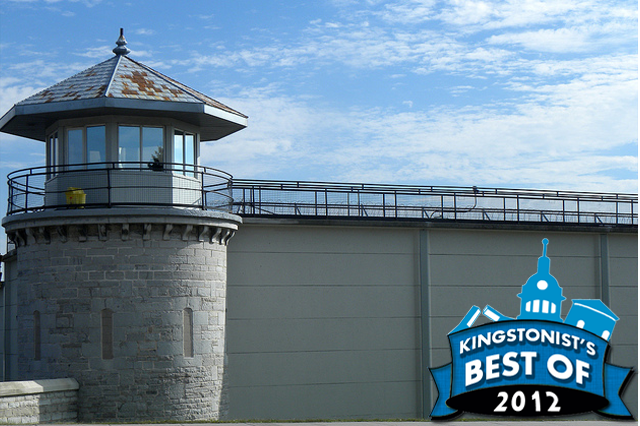 Last week the local community was taken aback by an announcement made by the federal government that Kingston Penitentiary, the oldest maximum security prison in Canada, home to the likes of Russell Williams, Paul Bernardo, Mohammad and Hamed Shafia and others, as well as the Regional Treatment Centre will soon be closing. While the news shocked Correctional Services Canada employees and residents throughout the Limestone City, what is more disconcerting is that the announcement caught local community leaders completely by surprise. In a press conference held at City Hall shortly after the Public Safety Minister Vic Toews confirmed the rumours, Mayor Gerretsen stated that he learned of the pending closure via social media, while he went on to comment that it was disappointing. Ted Hsu also did not mince words, releasing a statement that condemned the closure:

Today’s unexpected announcement fits the pattern of a cloud of secrecy surrounding the federal government’s budget…the Kingston area did not have any chance to provide input on the budget because they had no idea that the closure of Kingston Pen was in the works. A government cannot be open and accountable if major announcements are only made after debate has occurred… The minister has said that there will be savings of $120 million from the closures. I challenge the minister to produce the data and analysis to back up that claim…

Do you support the decision to close of Kingston Penitentiary?

In the wake of the announcement regarding KP, many have been fixated on the future of this historic slice of Kingston’s waterfront. Speculators have proposed transforming the maximum security prison into everything from an Alcatraz-styled tourist attraction, expanded museum, home to another department from Queen’s University, and even a high rise condominium, hotel and casino. While the development of Kingston Pen will undoubtedly spark as many fireworks as the cancellation of the Prison Farm program, let’s not forget the estimated 450 local CSC employees whose jobs are presently hanging in the balance. Although Toews suggested that these jobs would be distributed amongst other, soon to be expanded institutions in the area, the plan has not been shared nor guaranteed. While KEDCO’s CEO predicts that “the impact on the economy should be fairly minimal”, at this early stage it remains to be seen how the closure of KP will impact the Limestone City.

What are your thoughts on the closure of KP? Do you believe that the logic used by federal government is sound, and that the financial savings justify the decision? Or do you suspect Kingston may have been targeted because we’re not a Conservative riding? And what of the future of Kingston Pen and its employees? Drop off your comments below.

Thanks to haven’t the slightest for today’s photo.