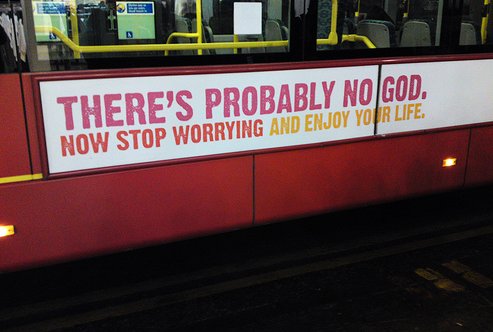 Image used under CC, and with thanks to fabbio.

“There’s probably no God. Now stop worrying and enjoy your life.” This colourful, and controversial slogan from the Freethought Association of Canada is slated to adorn the side of city buses in Toronto, Calgary and Halifax, but not in Kingston. Since the message is religious in nature, Kingston Transit’s advertising manager, Lamar Advertising, will not approve the advertisements for display. In fact, the advertising firm’s contract with the City strictly forbids them from accepting any ads that are deemed religious, political or otherwise controversial. Whatever happened to freedom of speech? This begs the question, what if Kingston Transit were to accept such controversial advertising campaigns? Would all hell break loose in the Limestone City?

Lately I’ve observed Kingston Transit buses with empty promotional frames on their exterior, which translates into lost advertising revenue for both the City and taxpayers. The benefits to businesses advertising on a humongous mobile billboard are plenty, but clearly Kingston has a problem ensuring that all available advertising spaces are utilized year-round. Is the City charging too much for these spaces, or are the rules simply too stringent too allow ads that fall into the controversial grey area? From the outside looking in, it’s nearly impossible to offer a totally balanced assessment, however the probable rejection of the Athiest campaign indicates that we’re driving away paying customers. Can we honestly afford to do that during these harsh economic times?

Taxpayers are essentially stock holders in Kingston Transit, and we all want our opinions and beliefs to be equally represented when determining the suitability of advertising content. With that in mind, I think the current regulations are too rigid, and they do not represent the majority of us who can stomach opposing points of view. Although I don’t want our mass transit system to start promoting cigarettes, alcohol, or firearms, I think that we can all accept religious and political messages so long as they are non-discriminatory.

“Isn’t it enough to see that a garden is beautiful without having to believe that there are fairies at the bottom of it too?” (London Tube ad quoting Douglas Adams). “I am an athiest and that’s it. I believe there’s nothing we can know except that we should be kind to each other and do what we can for other people” (London bus ad quoting Katharine Hepburn). These slogans and more were a part of the Athiest ad campaign that was recently endured by the UK, while London is now richer for the experience. That’s not to say that they simply lined their pockets with controversial advertising gold, but they also put up with the views of those who are not religious, and facilitated a non-violent dialog amongst members of the public. Regardless of our differing spiritual beliefs, I believe that most Kingstonians are tolerant enough to entertain these sorts of slogans.

6 thoughts on “What if Kingston…”