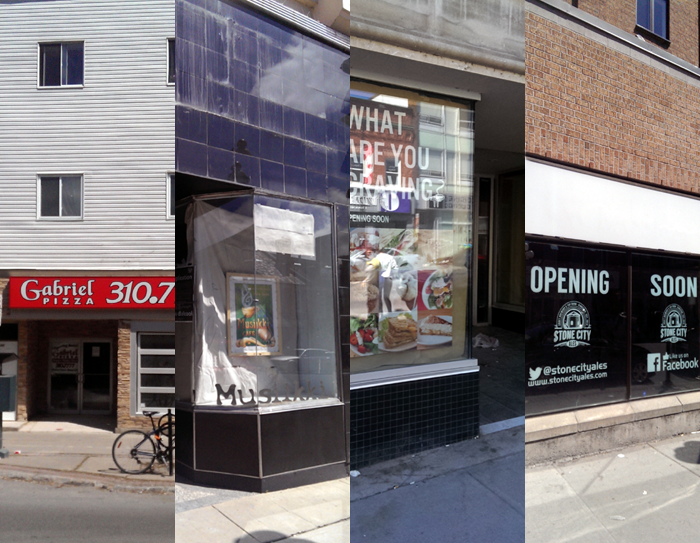 Nearly two months ago, we asked our readers to weigh in regarding recent significant business closures and what the long term implications might be for downtown Kingston. The relocation, failure and retirement of the likes of Indigo, Turks, Burrito Amigo, Urban Trade, Luke’s and most recently Just HiFi, has resulted in an overabundance of vacant storefronts and ‘for lease’ signs.  Ultimately these vacancies detract from the overall charm and vibrancy of the heart of the Limestone City, which constantly struggles to remain a bustling and relevant destination for locals and tourists alike.  Explanations regarding what’s to blame for our downtown’s woes range from not enough parking to more consumers shopping online, and from increased competition via big box retailers to cripplingly steep commercial rents.  While all of these variables play a part, population density and the changing  tastes of consumers are equally important factors to consider.

Vacancies may be a sore sight for those who frequent the city’s centre, however these blank canvasses also represent fresh opportunities for new businesses.  While we may have to wait upwards of a decade for a corporate behemoth to settle down in largest voids left by the likes of Indigo and Empire Theatres, the transition time for smaller and medium-sized properties tends to be less onerous.  Case in point, the vacancy left by Aroma at 248 Ontario Street was recently transformed into an exciting new nightclub.  Bay Jam, Kingston’s one and only Caribbean-inspired restaurant, also fits this description.

In the weeks and months ahead, downtown Kingston has over 8 new businesses preparing for their respective grand openings.  The field of new contenders predominantly consists of food services including restaurants, cafes, a pizzeria and even an independent brewery.  How will these new additions fare against the huge, corporately-owned restaurants and cafes, as well as established local institutions we already know and love?  Are the eyes of these new restaurateurs bigger than our collective stomachs?  With the recipe for success in downtown Kingston on our minds, this week’s poll asks:

Which new addition to downtown Kingston is the most exciting?

With the popularity of the craft beer scene, I am particularly looking forward to the arrival of Stone City Ales, and what their presence will add to our downtown.  That said, I find their location somewhat peculiar.  Perhaps they may have enjoyed more foot traffic and curb appeal with a position lower down Princess, or a well-traveled side street nearest City Hall.  That said, by positioning themselves further up Princess Street, their success could help spur development and curb nearby vacancies.  The rest of the new contenders seem to fall into the category of ‘been there, done that’, so unless they’re packing something something truly unique on their menus, they may have tough time attracting and retaining customers.

Which business are you looking forward to the most?  Which ones are destined to be next year’s vacancies?  And most importantly, what sort of businesses would you like to see added the list of those sporting an opening soon sign.

7 thoughts on “Most Anticipated Addition to Downtown Kingston”