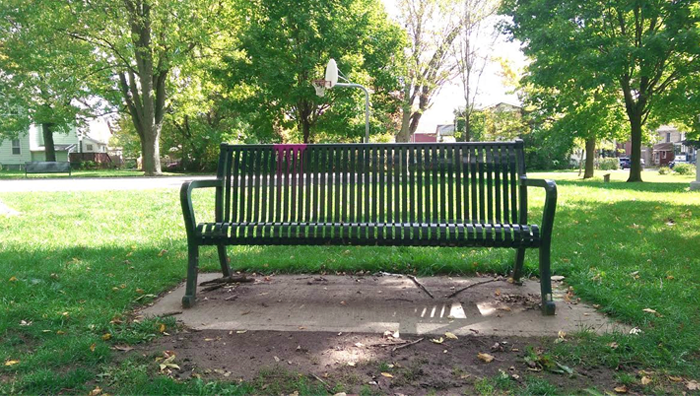 Numerous city parks and sections of downtown Kingston have undergone significant transformations in recent years, with notable upgrades including: LED lighting, accessible curb ramps, lush planters and bench seating. That last element has recently drawn the attention of a group of concerned citizens, who contend that new benches with metal armrests/dividers are “defective”, as they discourage people from laying down and sleeping in public spaces. The group has taken their message to the streets by posting flyers in select city parks, which challenge like minded citizens to do something about it. The flyers state:

It’s recently come to our attention that the City of Kingston has been installing new public benches with a metal divider in the centre. This pesky bar makes it impossible to lie down and get a good night’s sleep, let alone cuddle or smooch!

Clearly some bureaucrat in the Parks Department made a mistake. So we thought we’d save them the embarrassment and repaired a dozen benches.  All we needed was a pair of adjustable pliers (“channelocks”) and a few wrenches (7/16, 9/16″, or 5/8″, depending on the bench).

We’re sure there’s more defective benches out there – on Princess street and in recently ‘upgraded’ parks and trails – so if you, dear neighbour, want to chip in, we’d appreciate it.

Soon after these notices were posted and an untold number of benches were supposedly relieved of their metal dividers, Kingston City Police issued a response on Twitter cautioning that such action constitutes vandalism, and that those responsible could face mischief charges.  The City of Kingston also weighed in, noting that only half of the new benches had metal dividers, and that this feature was included to support accessibility rather than deter people from snoozing.  And to be absolutely clear, the sleepy demographic being referred to are the homeless.  Whether you buy the city’s explanation or not, this week’s poll asks:

Should city benches have metal dividers/armrests?

Kingston’s public spaces contain considerably fewer design elements (ie individual seating, spikes/studs) to deter unwanted behavoiurs (ie sleeping, skateboarding) than other Canadian cities I’ve visited.  Even so, benches equipped with metal dividers and armrests hide in plain sight, serving as the manifestation of attitudes and policy concerning how public space should be used.  In light of the numerous barriers to accessibility within the built landscape, and with due consideration to our ageing population, it stands to reason that benches should be equipped with strategically placed armrests.

The City of Kingston’s bothersome benches demonstrate that purposeful design can support desired activities while unintentionally repelling unwanted behaviours.  Ultimately, the creation of any barrier raises the question: just how “public” these spaces really are?  Who should decide which behaviours and activities are allowed, and are otherwise supported through the design of our public spaces?