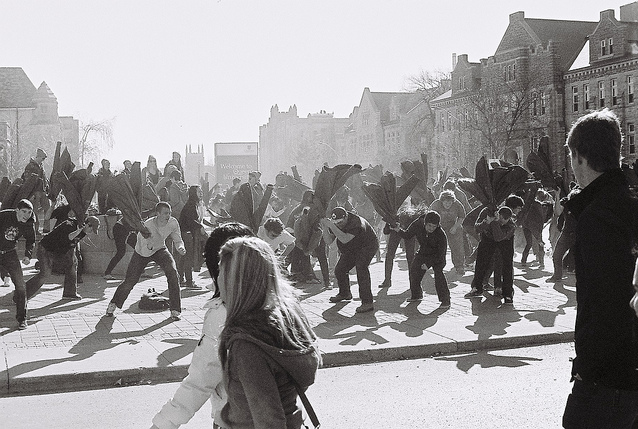 It’s hard to believe, but eleven years ago I was entering my first year of undergraduate studies at Queen’s University. I can still remember the nervous ride in the fully-loaded, family minivan on move-in day. We were greeted by various vulgar slogans hung from the overpasses of the 401, and as we got closer, groups of rowdy purple people slamming their jackets in the middle of the road. After painstakingly moving my life into my unfamiliar single room at Leonard Hall, I said my good byes, then ventured down the hall to meet the strangers who I would eventually call good friends. What transpired during the following week was a blur combining campus orientation, cheering for no reason, bathtubs filled with “purple Jesus” and some minor encounters with the local authorities.

Over the past decade, Orientation Week has since been increasingly scrutinized as a result of alcohol-induced antics, hospitalizing injuries and worse.  With Queen’s new measures in effect for Frosh Week, this week’s poll asks:

The evolution of Frosh Week has been well documented, and with all things considered, the decision to ban alcohol from dormitories makes sense to me. After all, a vast majority of first year students are not of drinking age, so it’s not really appropriate for the institution to condone an environment where underage drinking is permitted, and directly linked to unnecessary fatalities. Public Health Nurse Cathy Edwards, Co-ordinator of the Greater Kingston Area Safe and Sober Community Alliance, applauded the decision and commented that:

Alcohol-related harm stemming from falls, alcohol poisoning, street parties, assaults, and drinking and driving will not go away until we collectively work towards changing the culture of drinking in our community and in our society through policies and supportive environments.

Do you think the university’s tough position is warranted, or an overreaction to last year’s tragic end to Frosh Week? Better yet, how effective do you think the pilot project will be in curbing consumption, minimizing trips to the Emergency Room, and avoiding alcohol-related deaths? Please drop off your comments below, and let us know what you think.

Thanks to pdf1017 for perfectly capturing the moment I first encountered Frecs and their beloved GPAs.