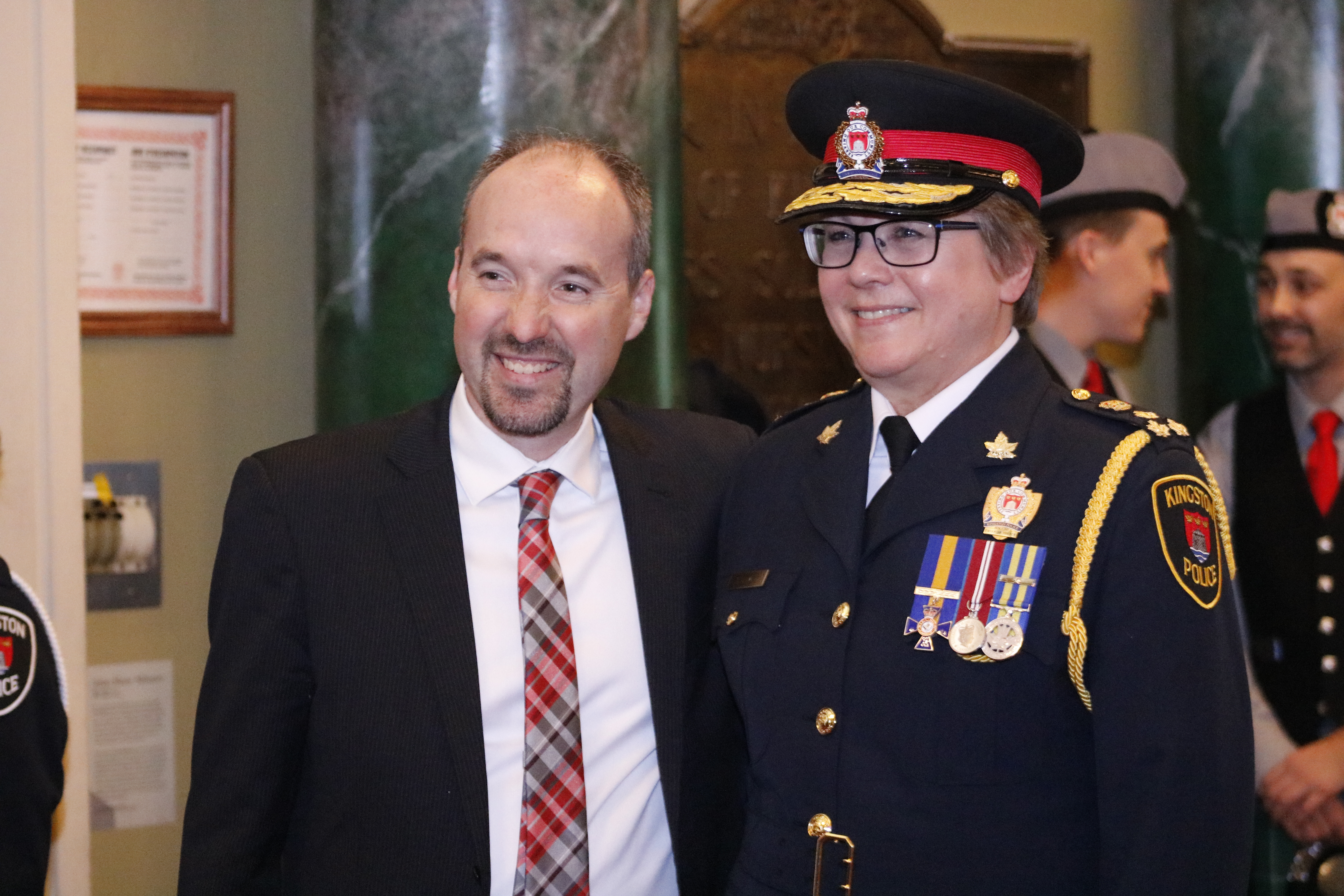 “Serving the Kingston community as its police chief has been a pinnacle of my career,” said Larochelle in his outgoing speech at the Change of Command ceremony. “I have thoroughly enjoyed the experience that I have gained by serving the community throughout my appointment. I received a lot of support during my appointment by Chief Antje McNeely, I sincerely feel that under her leadership and that of Deputy Chief Chris Scott this police service will maintain its reputation as a sophisticated and respected law enforcement agency, recognized for its professionalism and dedication to the community. I have no doubt that I am leaving the organization in great hands,” Larochelle continued.

City of Kingston Mayor Bryan Patterson offered words of thanks and support for both former Chief Larochelle and Chief McNeely during his initial speech, with a focus on successful relationships from past years which he said will no doubt be maintained and prosper under a new chain of command.

“There are moments where a mayor and a chief of police have to have conversations, and sometimes those might be over difficult issues that may be happening in our community. Each and every time those conversations were always done in a spirit of cooperation and communication, I really felt that we were working towards the same goals,” Patterson stated while remembering past involvement and interactions with former Chief Larochelle.

Mayor Patterson continued by providing a touching vote of confidence in the new Chief.

“I have absolute confidence that I will say exactly the same thing about Chief Designate McNeely, I think that her commitment and her passion for Kingston are well known, her desire to be able to move Kingston Police forward to the next level is certainly exciting for me to see both as Mayor and a member of the Police Services Board.”

Following the exit of the Honour Guard, newly sworn-in Chief Antje McNeely stated that she is very proud and honoured to have been appointed to the position. “It is an instrumental time for sure. There is so much that we have to do in terms of our future business plan and internal organizational needs. It is great to be a role model but it’s good to be a role model for everybody.”

As Kingston’s first female police chief, McNeely says she is proud to be a role model but believes that being a role model to everyone and not just females is what she really aspires for.

“For women and young people in general looking at the possibility of a career in policing, the biggest thing that I can say is that I think it is a great career, it’s important to keep persevering and try to get as many broad and meaningful experiences as possible.”

Chief McNeely stated that one of the concerns on the table right now is the issue of budgets. McNeely stated that, as of right now, the Police Services Board has approved a 2.55% increase within the policing budget. This issue will be brought forward to council in the upcoming year.

Antje McNeely continued to state that she believes in an “open door” policy, the incorporation of effective communication and a collaborative approach.

“We have a really strong leadership team, so when we are moving ahead we will work within our police organization throughout that process, I want to make sure that all our members all have input in things that are going on as well, so it is really important to me that we have a strong communication strategy.”

According to Chief McNeely, strides have already been made to ensure that effective communication strategies are in place. Things such as surveys and focus group sessions have been utilized and will be utilized going forward to ensure that all members of the force have an opportunity to voice their concerns and bring ideas to the table, she said.

In her concluding statement, Chief McNeely said that she learned many leadership qualities from former Chief Larochelle. “He was a great mentor for myself and our organization, I wish him all the best in his retirement, he deserves it.”