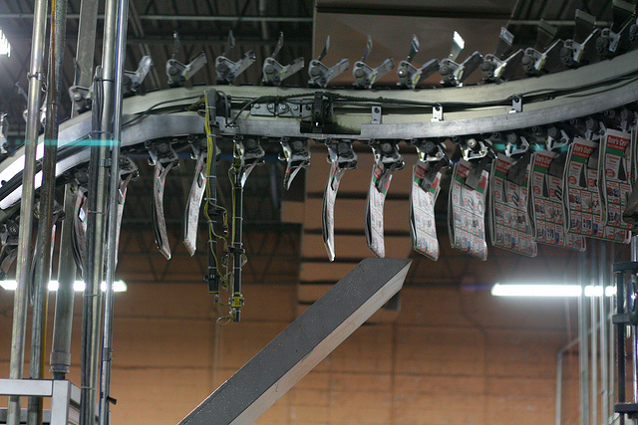 The Kingston Whig-Standard today had a celebratory piece on its front page about the appointment of a new manager / publisher. My suspicions were aroused by the fact that this person was going to be responsible for a whole load of local papers owned by the Sun Media empire. They have now been confirmed. Sun Media has given up all pretence of this being a genuine local paper: according to a message the Mayor, Mark Gerretsen, posted on Facebook, in news unreported by The Whig-Standard, Sun Media will be closing the local printing press here in Kingston. As Gerretsen comments:

That means the papers delivered to homes in Kingston will be printed elsewhere and shipped in… [and] will result in 40 local jobs being lost.

Like many papers, the Whig-Standard has been on slow decline for years. It was once an important independent newspaper complete with foreign correspondents and serious investigative journalists. But it lost its independence initially to Conrad Black, who fired many staff and curtailed its scope and reach, and then it was used, as many local papers have been, as a stepping stone to the creation of a right-wing TV network by Sun Media, who have now ended its last connection to the city it is supposed to represent and inform. A once fine newspaper has come to deserve its nickname of the ‘Sub-Standard’.

In the age of the Internet, why should we care? Just a few days ago, the Christian-Science Monitor in the USA published a story which traced the decline of North American local newspapers and asked if this was the end of good citizenship. With the best will in the world, volunteer-run community websites like Kingstonist do not fill the gap left by the decline of local newspapers – or at least not yet. Neither do the free-sheets that cannot do anything that would reduce advertising revenue, and which in any case are often already owned by the same media conglomerates – Kingston This Week is also part of the Sun Media group, for example. We need reporting of local news and quality investigative journalism based in our localities, to hold our elected representatives to account, to deal with issue that matter to us but that are simply too small for regional and national media to be concerned with. This is a problem for local democracy and for local community and will only increase the disconnection so many people in Kingston and the region around it seem to have from their city.

Thanks to Jinx! for the picture associated with today’s post.