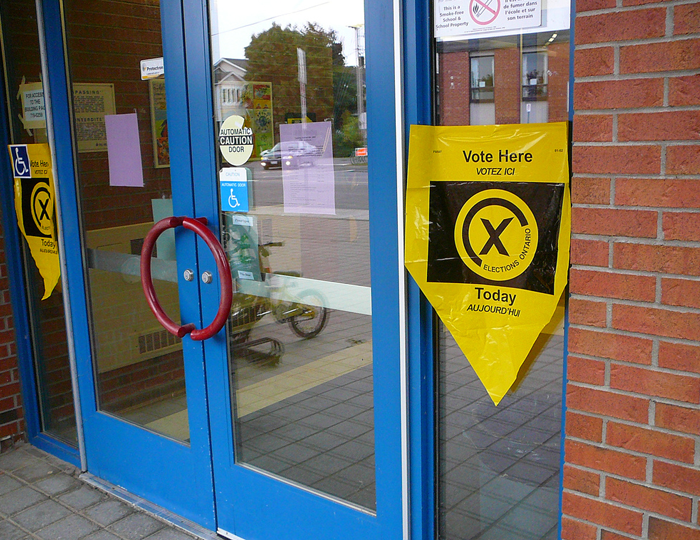 On Saturday, October 22, 2018, voters in Kingston have the opportunity to vote in a referendum on whether they want their city council elected through a ranked ballot. Here’s a brief overview of benefits and problems of the current system and a ranked ballot system.

The current system is a winner-takes-all system. A candidate has to get more votes than their opponent to win, even if it’s just by a single vote. Voters make one choice on the ballot as to whom they’d like to be their representative for the next four years. This is also the current system for federal and provincial election, albeit with candidates running under a party banner.

The main benefit to the system is that people are familiar with it. It’s the system in place for municipal, provincial and federal elections. Voters have a single choice on who they want to be their representative, and candidates try to get more votes than their opponents.

There are numerous problems with the FPTP system. First, it’s possible, even likely, a candidate will win with less than 50% of the popular vote if multiple candidates run for a single office. For example, if three candidates are running for mayor and Candidate A gets 34%, Candidate B gets 33%, and candidate C gets 33%, then Candidate A becomes mayor, despite 66% of the people voting for an alternative candidate. The candidate with the most votes wins, regardless of the margin of victory or the amount of people who voted for their opponents.

Secondly, the system changes how candidates compete for votes. There is an incentive for candidates to go negative, either by attacking their opponents directly or trying to dissuade their opponent’s supporters from going out to vote. If people are turned off by this negativity, all the better since only committed supporters will go out to vote. Alternative systems may not eliminate negative campaigning, but FPTP creates an incentive for candidates to do so.

A ranked ballot is an alternative way to elect representatives. The method is a bit more complicated than FPTP, but still quite easy. Voters simply rank their preferences. For example:

Under this system, if my first choice – Candidate A – gets the least amount of total votes in the district, then they drop off the ballot, and my vote goes to my second choice, Candidate C. This continues until one candidate receives 50%+1 of the votes and is declared the winner.

A ranked ballot tends to elect candidates that have a broadest base of support among a voting population, or at least elects those that are the second choice of most voters. It changes the way politicians campaign, as well. Candidates have an incentive to be cordial to their rivals, since they are trying to be the second choice for their opponent’s supporters. Moreover, it ensures the winner has at least 50%+1 support from their constituents, preventing a candidate with only a plurality of support getting into office.

As the example shows above, the system is more complicated than FPTP. Voters have to be informed about more than one candidate on the ballot in order to rank their choices. It also tends to elect political moderates, since they tend to be second choice for both the centre-left and the centre-right. This could limit political diversity and new ideas from getting into government.

The FPTP and Ranked Ballot systems have their benefits and problems. Ultimately, it’s up to the people of Kingston whether they’re satisfied with the current system, or wish to try an alternative voting system for the municipal election in 2022. Citizens should get informed and vote!

Brandon Tozzo is a lecturer of political science. He has written for the Toronto Star and worked for Global Television and CTV. He is currently a resident of Kingston and involved in progressive campaigns throughout the city.

Alternatively, Yes! Kingston, a pro-ranked-ballot organization here in Kingston, offers their views on why the ranked ballot is the best option. The organization is hosting ‘Ranked Ballads: An evening with Sarah Harmer and Friends’ on Tuesday, Oct. 2, 2018. The event is free of charge and will take place at The Spire (82 Sydenham Street) beginning at 7:30 p.m. (doors open at 7 p.m.).