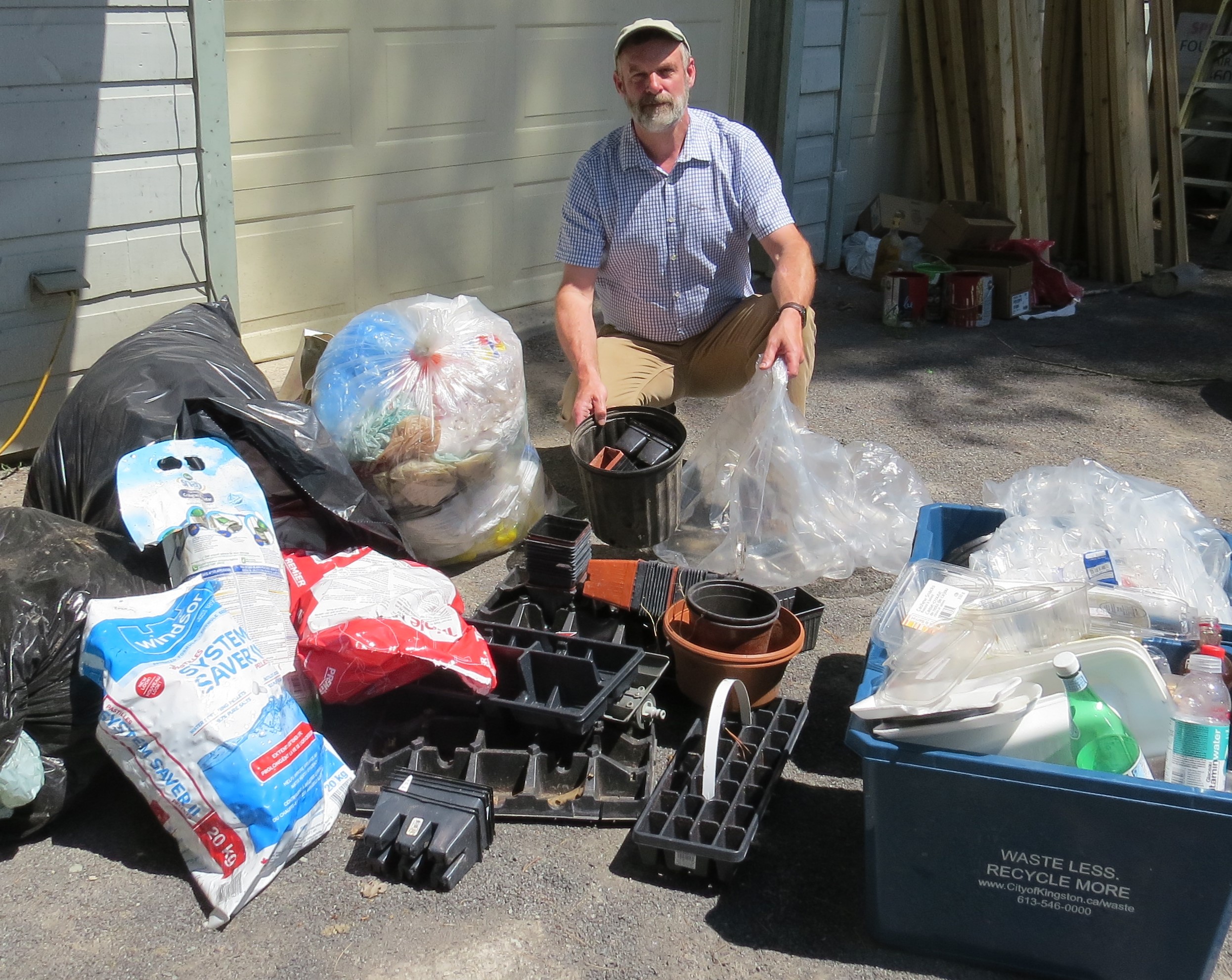 The Graduate is a movie that came out in 1967. In it, there is a scene where the young graduate, Benjamin Braddock, is taken aside by Mr. McGuire for a private chat about his future goals. Mr. McGuire says, “One word… just one word… PLASTICS.” That surely was good advice. In 1967, the United States made 2 million tons of plastics per year. This increased dramatically to an annual production of 40 million tons, and young Benjamin would have been rich if he followed the advice.

Plastic is a phenomenally helpful material. It is flexible, waterproof, strong and formable. We use it for so many things, from food packaging to furniture.  The one problem with plastics, though, is that they do not break down like wood or paper. Of that 40 million tons of plastic made every year in the States, only 7 per cent is recycled. Now, to our credit, we have gotten pretty good at recycling our household plastics and we don’t dump it into the oceans like third world countries do. The City of Kingston waste management people successfully take a lot of plastics out of the garbage system. They sort it and send it off to be recycled into new plastics. That being said, they don’t get all of it. There are coloured plastic trays that are rejected. There are contaminated plastics that don’t make it, and there is all of the yucky plastic wrap and food packaging that still goes off into the garbage. Plastics don’t recycle repeatedly like steel does. They can only go around a few times until they break down and get sent to the dump. If you make a trip to the waste drop-off depot, you will see where all of this rejected plastic goes. Intermixed with the rejected plastic from the recycling, you will see old plastic lawn chairs, packing crates and discarded toys. All of this landfilled plastic has a use beyond recycling, and it should be placed beside ‘Reduce, Reuse, Recycle’ as ‘Repurpose.’ All of this rejected plastic can be repurposed as fuel.

Plastics are made from natural gas, which means that they have a very high energy content when burned. Throwing a plastic bottle onto a campfire will cause a bright hot flare up of flames, but also black acrid smoke. That is because a campfire is not really that hot of a fire. Plastic on a fire is therefore not burning that well, and there is an incomplete combustion which also releases noxious chemicals. If you put plastics into a really high temperature fire they will burn fiercely, while completely eliminating most of the nasty smoke. What we need is an industry that needs good quality fuels and an industry that burns at really high temperatures. That industry is the cement industry.

Cement is made by heating up limestone at very high temperatures and then pulverizing it into a powder to be mixed with gravel to make concrete. Our modern society is completely dependent on cement to make our bridges, buildings and even our sidewalks. A cement plant burns coal, lots of coal. They powder it and blast it into cement kiln and burn it at 1,800 degrees Celsius. All of this coal burning produces an awful lot of carbon dioxide, which is vented into the atmosphere, causing global warming. The cement industry creates about four per cent of our greenhouses gases, which is why the industry is looking at using waste plastics as an alternative fuel. Lafarge has a large cement kiln in Brookfield, Nova Scotia and they have done a test project of burning waste plastics mixed in with the coal. Since plastic could be described as solidified natural gas and since natural gas burns cleaner than coal, it is not a surprise that they were able to drop their carbon dioxide levels by 30 per cent. This is a significant improvement in dropping their pollutant output, which is why the Lafarge Cement plant in Bath is doing a three-year study in co-operation with Queen’s University to look into using waste plastics as a fuel.

I hope that they successfully start using waste plastics as a fuel for three significant reasons. It decreases the amount of greenhouse gases that are being produced to make a product that we need, it reduces the amount of coal that is being pulled out the ground at great environmental cost, and finally, it diverts a large amount of waste plastic from our landfills.