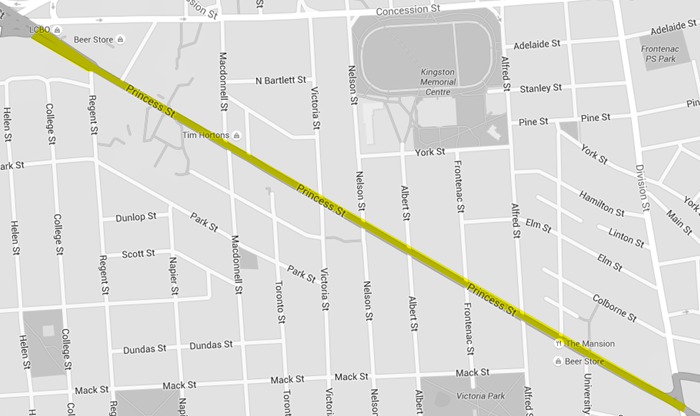 In our final snapshot of downtown Kingston, we turn our gaze to the ongoing revitalization of Williamsville’s Main Street. This section of Princess Street, spanning from Division to Bath Road, has been the subject of a major study, debate, and  fiery controversy over the past few years. One of the most contested issues has been the recent addition of bike lanes to Williamsville, which reduced already limited on-street parking and “put many businesses in jeopardy of closing”. Past explorations of this 12 block section of Princess Street documented numerous used car dealerships, car rental companies, gas stations as well as vacant lots and abandoned buildings.  Some of those long standing vacancies have recently been turned into large scale student rentals, bringing new life, new business opportunities and new problems to Williamsville’s Main Street.  Don’t let the high number of vacancies and closures fool you, as a handful of new and expected student housing projects as well as spin off businesses will soon start to take shape.  With the ongoing pursuit of a revitalized Williamsville in mind, let’s jump right in and explore what has changed, and is otherwise ripe for exciting development in the not too distant future.