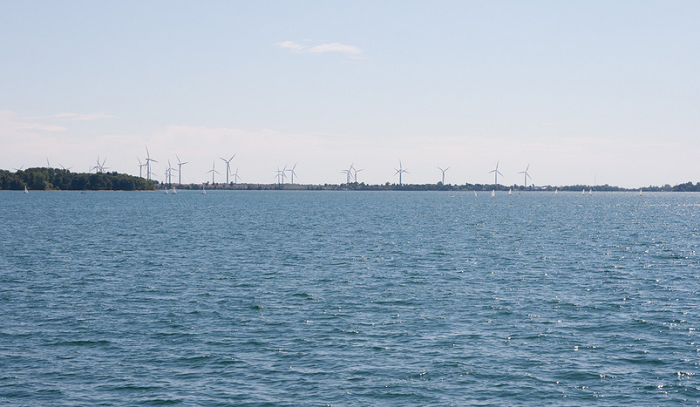 Wolfe Island is like a whole other world just across the water from us.  I have heard it described as a magical place where time goes by a little bit more slowly, a place where saying a destination is “right from the ferry dock and 5km up hwy ___” is good enough.  Somehow, this magic is just a short ferry ride away from “the big city” and has so much to offer to tourists, Kingstonians and Islanders alike.

The ferry runs everyday from 5:45am to 2:00am (see the full schedule here).  But, there’s no need to hurry back to the mainland when there are so many great places to eat and lovely places to stay on Wolfe Island.  With the Wolfe Island Music Festival, one of YGK’s biggest summer events, just one week away, this seems like an appropriate time to explore everything the island has to offer.

Big Sandy Bay (right off the ferry, left on 95 to Reeds Bay Rd and right onto 3rd Line Rd.): Described as one of the best hidden gems in the area, Big Sandy Bay is a well-loved beach located on the western shore of Wolfe Island.  The area is known for rare birds, trees and other unique plant species.  When visiting Big Sandy, come prepared with plenty of water to drink and some form of shade.  Swimming is at your own risk.  Lastly, be prepared for a 20 minute walk from the parking lot through wetlands and woodlands.  Sounds like a lot, I know, but it’s worth every minute!

Bird Watching (everywhere!): Over two-hundred species of birds live on or migrate through the island throughout the year, making Wolfe Island a perfect place for birders.  In fact, the island has been recognized by Important Bird Areas of Canada – an initiative that monitors and conserves significant bird habitats.  All you need is a good bird book and a pair of binoculars!

Cycling (various routes):  The first thing I was ever told about Wolfe Island when I first came to Kingston was that the cycling is excellent, and it’s true.  Four main routes have been established through coloured signage.  Most of these routes take cyclists away from heavily trafficked areas, making for a peaceful, pleasant tour of the countryside.

The Wolfe Island Corn Maze (right turn off the ferry and up Hwy 95 about 3.2km): This corn maze is a popular destination for kids of all ages.  The season varies depending on the weather and the growth of the corn but most seasons run from the beginning of August to the beginning of November.  This fun and sometimes spooky maze offers affordable good times with prices ranging from $7-9.

Fishing: The waters surrounding the island are filled with fish of all types and sizes including Walleye, Small Mouth Bass, Pike and Muskellunge.  Since most waterfront property is privately owned on Wolfe Island, the majority of the fishing does take place in boats, however, there has been success in the marshy area on the 2nd Line Rd. near Little Sandy Bay, as well as near the canal on Hwy 96.  And no matter what anyone tells you, you won’t catch a shark!

Golfing (802 9th Line Rd.): Riverfront Golf Course is a nine hole course designed to meet the needs of seasoned and beginner golfers alike.  At the same time, the wind conditions on the island can make for a challenging round!

Old House Museum (Leander Street, near the ferry dock): The Old House Museum is the oldest home in Marysville.  The museum is run by volunteers and houses a variety of items from Wolfe Island’s history such as stories of the ferry from a captain’s perspective and items from The Catholic Women’s Institute.

Wind Turbine Tours (everywhere!): Print off  the Self-Guided Wolfe Island Walking Tour Map and narrative and take yourself and your family on a tour of the wind turbines that populate the island.  Learn about hydro developers, the history of the wind farm, how wind turbines work and are constructed, and much more.

Chili Festival (Wolfe Island Community Centre): Each year Wolfe Island celebrates winter with this popular chili festival.  The day features the annual chili competition, ice skating, hockey and other games, as well as hay rides around the village.  The festival takes place near the end of January or beginning of February.

Wolfe Island Classic (Marysville Village): This 5 and 10km race has been running annually at the beginning of July for 34 years now and goes to support the Wolfe Island Community Medical Clinic.  The course is described as “scenic but hilly and challenging”.

Wolfe Island Music Festival (Marysville): This ever growing festival has been taking place at the beginning of August for over 10 years now.  The party runs over two days and showcases the talents of 20 Canadian bands – some of whom are local Kingston groups.  Tickets typically go on sale in May and can include camping.

Thanks to Chris Rimmer for today’s pic.

3 thoughts on “Guide to Wolfe Island”