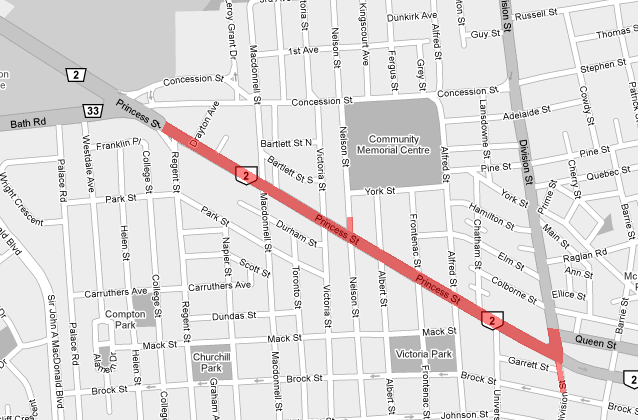 Late last December we launched a three-part series which documented vacant storefronts, recent relocations as well as new businesses in downtown Kingston.  In part one we combed lower Princess Street from Ontario to Division, highlighting unfortunate closures such as S&R and Downtown Kingston Sports, as well as positive growth including Urban Outfitters and Sima Sushi.  Our second episode took aim at downtown side streets, while it celebrated new additions such as The Iron Duke, The Kitschen and Dwell Boutique.

Thus far, this series has generated an outstanding conversation, which proves that many people are concerned about the current state, and future composition of downtown Kingston.  The time has come for our final snapshot, which will focus on upper Princess Street, or midtown if you prefer, specifically the section between Division and Bath Road.  A general guide to our area of interest is highlighted in red on the map, which is displayed above.