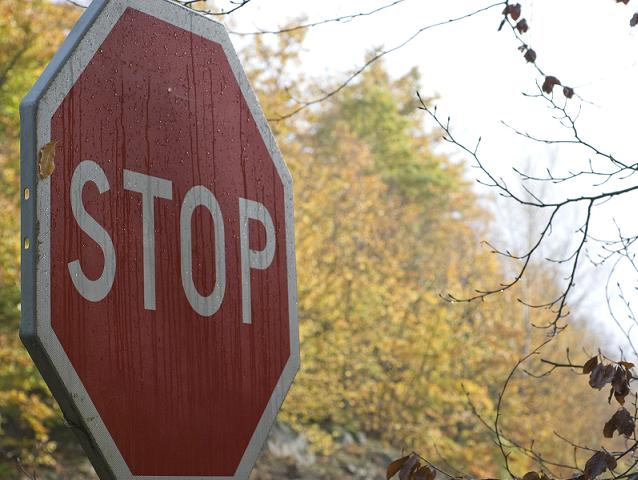 Over the last decade or so Kingston has seen an emergence of more and more methods to help slow traffic in and around residential neighbourhoods.  I’ve been doing my own research on the subject because my street happens to be particularly bad for speeding and missed stop signs.  Since I moved into my home three years ago, there have been at least 5 accidents on my street, two of which resulted in cars being written off and the property of home owners being  seriously damaged.

Because of these accidents, Harvey and I have written our councilor on numerous occasions to encourage the city to consider taking some kind of action against the speeding and generally unsafe driving that goes on outside our door.  The response from the city has not been promising:

Sadly, there was a terrible accident another block down from us that resulted in the death of a cyclist.  There hadn’t been many other issues at that corner but the loss of life brought us a new stop sign. This scares me.  Do we need the accidents to get worse before we fix the problem?  Hopefully, with the help of email and letter writing neighbours, we can get this issue sorted out before another tragedy occurs on our street.

In the meantime, I thought I’d take this opportunity to share with all of you what the different measures are in the City of Kingston’s Traffic Calming Initiative.

Speed Humps: “A speed hump is a raised area of a roadway, which deflects both the wheels and frame of a traversing vehicle. It is longer than the wheelbase of most cars; this feature distinguishes it from a speed bump.”  So, a speed hump is designed to allow vehicles to drive over them without the jarring effect of a speed bump, meaning you can still be going around 30-40km/hr without too much disturbance to your car or your passengers.  A speed bump is meant to slow cars to a point of almost stopping, which is why we see those more in parking lots rather than on city streets.  Good examples of the use of speed humps in Kingston are Rideau Street and Woodbine Road.

Curb Extensions: “A curb extension is a horizontal intrusion of the curb into the roadway resulting in a narrower section of roadway. The curb extension is extended on one or both sides of the roadway to reduce its width to as little as 6.0 metres for two-way traffic. “  Until I read this, I just thought that extra bit of curb was a waste of roadway, but it turns out this is a safety measure used to ensure drivers are staying focused and aware of their speed.  The newest space using this method is the corner of Princess and King where the sidewalks and roads were redone last year.  The curbs come out further in some areas to keep drivers in a narrower space.  This smaller space probably also helps reduce cycling accidents…as long as cyclists don’t try to sidle in next to cars in these areas (that’s a whole other post..)

All-Way Stops: The most requested traffic calming measure is more stop signs.  According to The Canadian Guide to Neighbourhood Calming, all-way stops aren’t as effective as one might think.  More stop signs mean more monitoring by police, and research shows that more signs actually result in less compliance from drivers.  The more you make them stop, the less likely they are to do so properly.  If you’re traveling down a street with a stop sign at every corner, those stops are going to become less and less complete.  This results in dangerous habit development in drivers and less sense of security for pedestrians attempting to cross these intersections.  There is also evidence that speeding in between these signs becomes more common.

Community Safety Zones and Reduced Speed Limits: Some neighbourhoods have signage that reduces the speed limit from 50km/hr to 40km/hr such as Queen Mary Road.  The problem here is similar to the effects of the stop sign in that many drivers will continue to go the speed they wish and will show frustration toward those who do adhere to the speed limit.  This again causes a false sense of security for pedestrians and results in the need for more enforcement by police.

School Zones:  I thought that slow speeds in school zones would be a no brainer and that most drivers would adhere to this without exception, but as determined by the City, school zones are the least effective slowing measure.  Only when these areas are heavily enforced do they see a dramatic change in how many motorists obey the reduced speed signs.

According to the City’s website, community involvement is the most important part of this program and all measures taken are done with the input of residents from the neighbourhood in question through public meetings and surveys.  So, although we are feeling somewhat ignored right now, persistence and solidarity amongst neighbours is key.