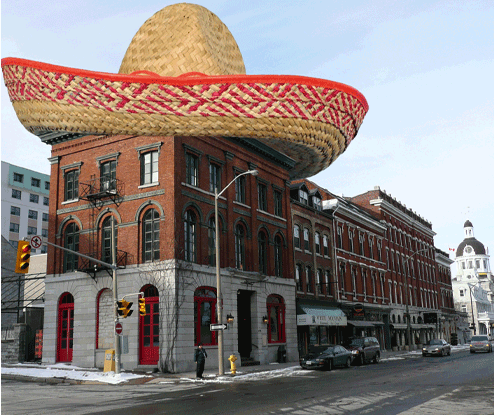 It is known around Kingston as the black hole, the corner of doom, an address that few businesses dare touch, while those who’ve rolled the dice have paid the ultimate price. I am referring to the corner of Johnson and Ontario were countless independent restaurants and bars have come to die. 172 Ontario is a prime downtown location that’s a block away from City Hall, a stone’s throw away from the waterfront and in the company of Woodenheads, White Mountain and Frankie Pesto’s, so it does not make sense that so many attempts have failed. City records do not indicate that the earth beneath this address was once home to a cursed cemetery, hence there is no supernatural explanation.

I don’t think you need to be familiar with the finances of the latest failed attempts, specifically Johnny Mac ‘s family friendly restaurant, and Juice, a student oriented nightclub, to know that they were anything but successful. While both achieved mediocre buzz when they first opened their doors, neither had staying power in a downtown that already boasts dozens of family eateries, and Friday night meat markets. Even so, I do not believe that the presence of an additional downtown restaurant or watering hole is going to tip the fragile balance, but rather the food and bar industry is a ruthless beast. To achieve success in the restaurant game, one must have extensive experience, lot’s of capital and even more patience. A bit of luck wouldn’t hurt either.

When I saw that Mexicali Rosa’s was going to take their turn at the corner of doom and gloom, I thought that it was a no brainer. This franchise’s fiesta began in Ottawa in 1979, and they’ve since opened up 35 stores, making them Canada’s largest chain of Mexican-themed, casual-dining restaurants. Their restaurants are bursting with cliché sombreros and saddle blankets hanging on the walls, while sizzling fajitas, and ice-cold cervezas make up for the cheesy decor. Sure Kingston already has an authentic tex-mex restaurant located two blocks down the street, but the heads at Mexicali Rosa’s feel that this is the right location for the chain. On that note, the company has been on pace to open about 7 new franchises a year since 2003, thereby flooding Canada with their brand, which includes a cactus at every table. Although they may run the risk of over saturating the market, I’m predicting that corporate experience and deep pockets will translate into success for the new quesadilla on the block.