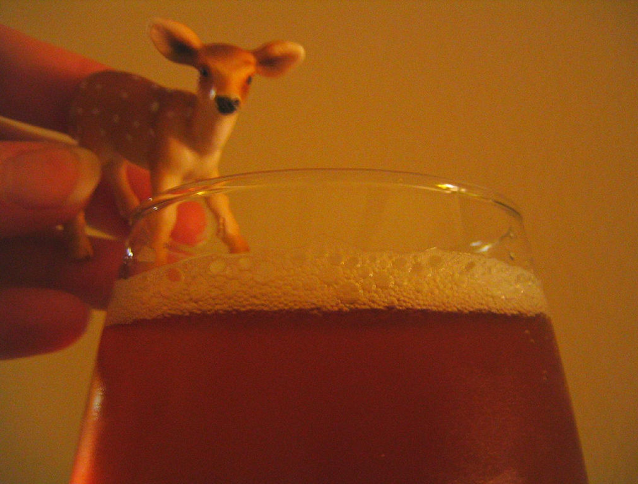 Back in 2007 I was dining at the Kingston Brewing Company (KBC), when I learned that their popular Whitetail Cream Ale would soon be available in local Beer Stores, LCBO’s and select dining establishments.  Fast forward to 2009 and the Brew Pub’s promise of Whitetail seemed like a pipe dream that might never come true.  It had been a long time since my last pint at the KBC, but after a brief visit last night, I am pleased to announce that they’ve kept the dream alive and are very close to Kingston-wide distribution of Whitetail Cream Ale.  The advertisement on our table read:

Attention Whitetail Hunters!  As you are aware, the popularity of Whitetail increased a few years ago to where it became necessary to contract-brew it to keep up with demand.  Effective immediately we are pleased to announce that we have contracted award-winning Muskoka Brewing Company of Bracebridge Ontario to help us make your hunt for whitetail successful.  Watch for details (White-de-tails) this spring for our official launch with our Muskoka friends.  Happy Hunting!

This is not the first time the KBC  has contracted out the brewing of one as their popular selections, as Montreal’s McAuslan Brewing Company and Waterloo’s Brick Brewing Company have helped them keep up with demand in the past. That said, neither partnership resulted in the availability of the Brew Pub’s beverages outside of their establishment.  Although an exact launch date is not known, we’re asking everyone to remain calm, and be on the lookout for Whitetail  in Kingston’s Beer Stores, LCBOs, and restos.  Special thanks and credit to leff for the photo at the top.

2 thoughts on “Hunting for KBC’s Whitetail”