Over the next two weeks, Kingstonist will be counting down our top 10 posts from 2010. The list includes a diverse mix of topics that are near and dear to the hear’s of our volunteer contributors. Rest assured, we’re already working on some interesting stories for 2011, but we’re suckers for retrospective top ten lists. First up is a piece from yours truly regarding the pending takeover of downtown Kingston by a new class of burger and poutine restos. “The Burger Poutine Wars” received 132 votes from our hungry readers, and it has maintained relevance with numerous reviews of Smokes, Harpers and Five Guys. While many of us would like to think that 2010 is characterized by more pressing issues, it’s clear that a lot of Kingstonians still have cheese curds and gravy on their minds. 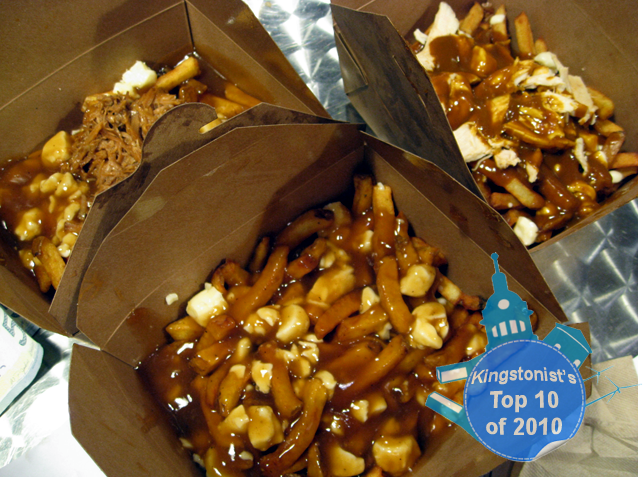 The vacancies along Princess Street seem to be clearing up lately, and so goes the ebb and flow of prosperity for small businesses. Within the restaurant sector, the past few years have been dominated by a flurry of new sushi spots. From Sushi Ya to Asha, Sima, Ta-ke and all the rest, downtown Kingston is flush with fresh sashimi and sushi. While many of these places have managed to survive thus far, the local restaurant scene is about to receive four new competitors, all of which specialize in either burgers or poutine. Smoke’s Poutinerie (181 Division), the Poutine Place (343 Princess), Five Guys Burgers and Fries (185 Princess) and Harper’s (98 Princess) are all making final preparations to open up shop and go fork to fork for poutine and burger supremacy in the Limestone City. Accordingly, this week’s poll question asks:

Which poutine or burger resto are you most excited about?

To be honest, I know very little about any of these new places, save for what I’ve gleaned from friends in other cities, and folks within the restaurant biz here in Kingston. Smoke’s boasts over 20 varieties of poutine and they’ve established a bit of a cult following thanks to locations in Toronto, Ottawa and Tremblant. The sign in the window at the Poutine Place advertises a strange mix of organic burgers, poutine and fruit smoothies. From what I can tell, Five Guys Burgers and Fries is a relatively large chain, with numerous locations throughout the US, and some newer locations springing up throughout Canada. Last but not least, Harper’s is brought to you by the same minds who opened up Le Chien Noir and Atomica, while it is expected to offer gourmet burgers and premium draught.

Thanks to Sifu Renka for today’s photo.