Finally, this “best of” show wouldn’t be complete without mentioning Kingston’s obsession with burgers and poutine.  As luck would have it, this gastronomical topic ended up on our top 10 list in 2010.  This past year, we revisted the glutonous subject thanks to the arrival of The Works, and an expanded menu at Harpers.  Needless to say I love them both, including Five Guys and Smokes, but really my body and bank account can’t sustain regular consumption.  With 2009 being the year of sushi, 2010 and 2011 belonging to the burgers and poutine, the only question is what 2012 will have in store for us? 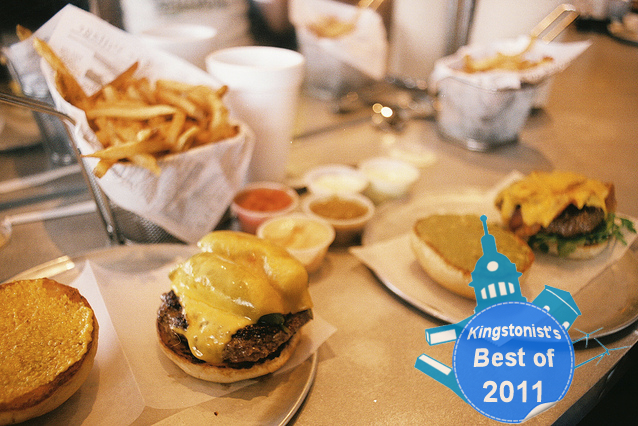 Last August, a handful of new downtown restaurants began to emerge, while each specialized in their own brand of gourmet burgers, poutine and trans fat-laden delicacies. Kingstonist’s poll regarding the burger/poutine wars went on to crown Smoke’s Poutinerie as the most anticipated new establishment of 2010, while this post also received a record number of comments that has yet to be surpassed nearly one year after the fact. Since the initial charge onto the burger and poutine battlefield, we’ve witnessed victories, losses, new competitors and revamped weapons of mass consumption. The Poutine Place was the first joint to lose out, while Smoke’s and Five Guys Burgers and Fries have successfully developed loyal, belt-loosening customers. In recent months, Harper’s Burger Bar nearly doubled the size of their menu and expanded with an outdoor patio, while The Works Gourmet Burger Bistro arrived and has had a full house since opening night. With the new gourmet burger/poutine-era upon us, this week’s poll asks:

Which gourmet burger or poutine restaurant is the best?

Many of our readers have commented that these places are overpriced, over-hyped, and thanks to their expansive menus, a bit overwhelming. It’s true that you’re going to pay more at Five Guys, Harper’s, Smokes, and The Works, but then again, the portions are bigger, the ingredients are better, and in certain cases, they have fancier atmospheres than your average fast food chain. For the moment, the burger blitz of 2010/2011 is not showing any signs of slowing down, but just how long can these establishments survive, and what are the long-term implications for local rates of type 2 diabetes and heart disease? Could the pendulum eventually swing back and give way to an anti-burger wave of restaurants catering to those who yearn for slow, local and vegetarian food options?

Which gourmet burger or poutine establishment do you enjoy the most? Are you hopeful that more competitors will join the fray in the Limestone City, or are you optimistic that we’ll get a long overdue gourmet vegetarian alternative? Please drop off your comments and concerns below.

One thought on “Best of 2011: The Burger/Poutine Wars Revisited”