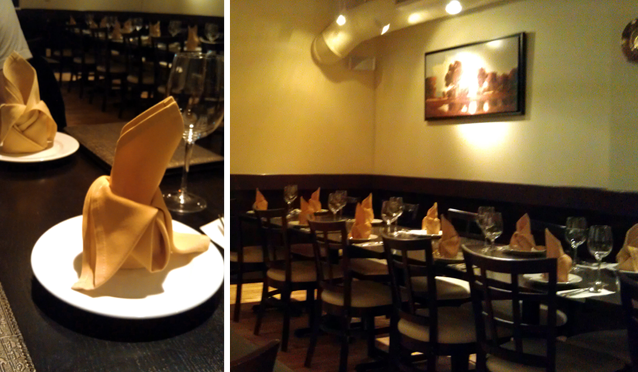 Whenever I spot a “restaurant coming soon” sign, I get excited at the prospect of adding another solid dining option to my culinary dance card.  Such was case a few months ago when Thai House Cuisine quietly announced that they would be setting up shop in the former vegetarian haven, Lotus Heart Blossom.  As this impressive establishment is slightly tucked away on Sydenham Street, it does not enjoy the same level of visibility nor foot traffic as others who occupy prime positions along Princess Street.  Does the 50 metre deviation north on Sydenham make that much of a difference?  I would argue that it does, and therefore the longevity and success of Thai House Cuisine will depend heavily on their reputation, repeat business and so on. 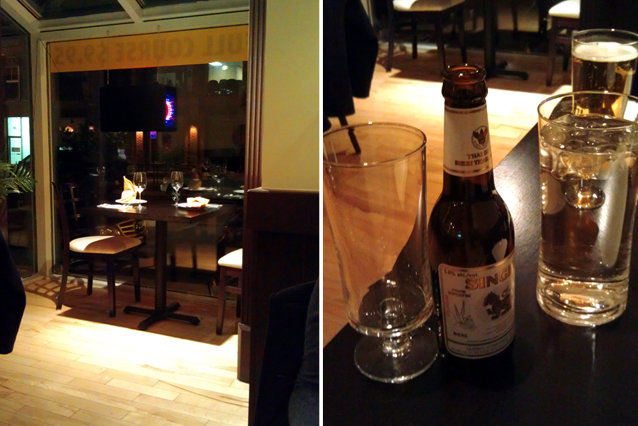 As far as local Thai restaurants go, Thai House Cuisine has the competition beat hands down when it comes to atmosphere and ambiance.  While it may not be traditional nor what diners expect, the interior boasts beautiful hardwood floors, large windows to the outside world, modern tables,  comfortable seating, and special place settings complete with sparkling wine glasses and creatively folded napkins.  Combined, these elements present a clean, uncluttered and inviting backdrop that pleases the eye and welcomes hungry diners inside.  I could easily see myself ending up here on a very special occasion to enjoy a fine dining experience.

I always make an effort to seek out new foreign brands of beer and so on when I dine at a Thai, Cambodian, Vietnamese or Indian spots.  Thai House Cuisine offered up a lovely import in Singha (pronounced sing-ah) ($PRICE), a crisp and refreshing beer, which I’ve since discovered on the shelves of our local LCBO.  Rather than enjoy these straight from the bottle, our waitress insisted that we sip our Singhas out of tall glassware , pictured above/right.  Of course, if beer isn’t your thing, Thai House Cuisine has a decent wine list.

We started our meal with the quintessential Thai appetizer, vegetarian spring rolls ($4.99), three fried, crispy rolls stuffed with cabbage, carrot, black mushroom and glass noodles.  As you can see (above left), the dish was adorned with tasteful garnishes and traditional sweet and sour dipping sauce.  The rolls themselves were bursting with crunchy vegetables and mouthwatering flavour, fried to perfection without being saturated with oil.  Easily a mini-meal in itself for those who are looking for a quick take-away bite.  Second up was the chicken satay ($7.99), which consisted of four giant skewers of marinated chicken, grilled and served alongside a cucumber salad.  Presentation was again top notch, while the taste and portions reinforced our decision to try out this new establishment.  Honestly, I cannot say enough good things about their fresh, spicy peanut sauce, which delightfully balanced heat with the creaminess of the peanuts.  Thai House Cuisine’s menu includes other tempting starters such as: shrimp chips and deep-fried tofu, a selection of meal-sized soups: hot and sour, lemongrass vegetable, coconut chicken, and various salads: mango, thai, duck and the list goes on. 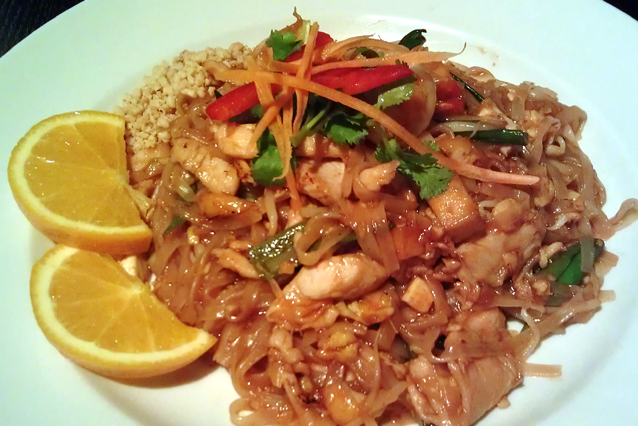 Onto the mains, where my dining companion ordered her go-to dish, Pad Thai ($11.99), stir-fried rice noodles with tiger shrimps, sliced chicken, tofu and eggs served with ground peanuts and bean sprouts.  Similar to the items we previously enjoyed, the presentation is quite appetizing and the portions generous considering the price. That said, she did find the dish a bit on the sweet side.  A self-proclaimed noob when it comes to Thai cuisine, she was curious as to whether this is a regional characteristic as she has experienced this sort of sweetness before.  In the long run, she felt that next time she will opt for a curry dish with some spice.  If sweet is your thing though, this dish does satisfy and is generous with the amount of chicken, tofu and shrimp. 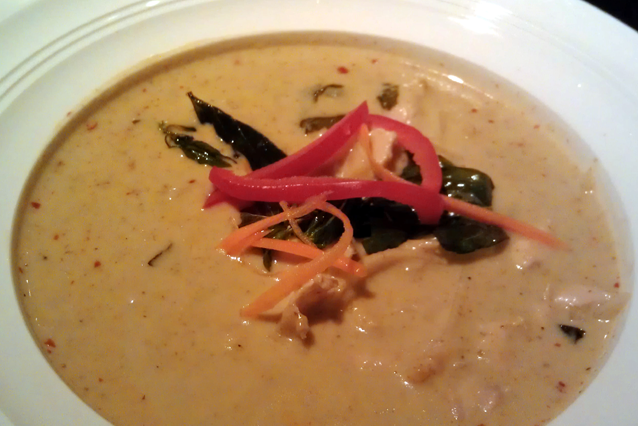 Last, but certainly not least, was my green curry chicken ($11.99).  Of course, I requested that the kitchen prepare this extremely hot, which the menu suggest “may make you cry”. Served on a light and fluffy bed of white rice, also including bamboo shoot, basil leaves, as well as shredded carrot and red pepper garnish. I was certainly satisfied with the amount of heat this dish conjured up, however I was not as taken with the general taste. One would normally expect an flood of curry, coconut and sweat-inducing spices, however the overpowering taste of my dish was salt. So much so that I considered sending it back. While the kitchen may have erroneously translated that pinch into a heavy handed punch of salt, this was certainly not the best way to conclude our meal.

With four other locations in Ontario (Toronto, Milton and Belleville), it is absolutely apparent that the minds behind Thai House Cuisine have a well rehearsed, crowd pleasing formal that presents solid competition to local establishments. While we were not entirely pleased with the mains, the other aspects of our meal and the experience were undeniably positive. I would certainly give Thai House Cuisine an opportunity to redeem themselves, and in fact, I’m looking forward to it. I only hope that my first, less than perfect experience was a mere blip on an otherwise impressive Thai dining establishment.