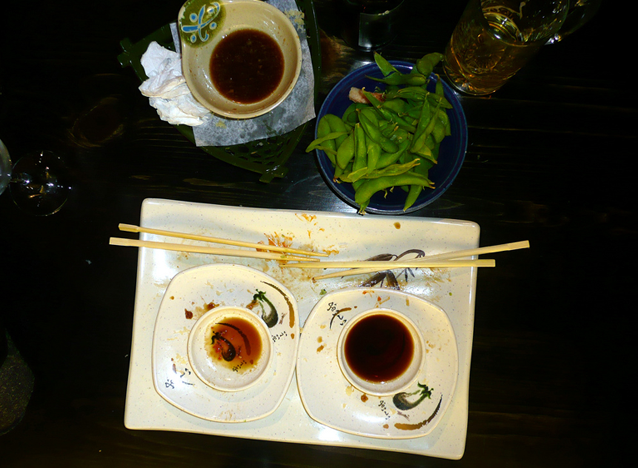 Well, I must say, we sure have a lot of sushi in this town considering our size. That is not by any means a complaint though! Yes, another sushi review. I can’t help it, I’m an addict!

Harvey and I hit Ta-ke Sushi last week and I have to say I was not impressed. It was his first time but not mine. I had been there once for lunch (this was before I was starting to get adventurous so I only has some avocado rolls, tempura and a few dumplings) and then I ordered take out from them once or twice because Asha and Discover Japan were closed. The take out was OK but pretty expensive – almost twice as much as I pay elsewhere.

Last week’s experience was enough for me to write it off completely now. I won’t go back. We went on New Year’s Eve. I want to give them some slack since it was a holiday but…no, they still have a job to do if they’re going to choose to be open. (I say “choose” because Sima and many other restaurants were closed that night. Sima was my first choice for our last meal of 2009.) When we arrived we were pretty much the only people there and that was just fine with us. Our waiter came immediately and took our drink order. Then the hammering started. Seriously. I guess the owners decided that since it was a quiet night, it would be a good time to fix any wobbly chairs in the restaurant and having customers was no reason for them to stop. So we endured hammering and drilling through pretty much our entire meal. I was ready to leave but then, where would we go in Kingston at 10pm for food on NYE?

Our waiter took our order: 8 pieces of spicy tuna (only 6 came), an 8 piece Dynamite roll, edamame and veggie and shrimp tempura. Pretty straight forward. The food came quickly and despite our dwindling drinks, we were never offered more. In fact, our waiter didn’t come back to the table again until it was time to clear our plates. There was no salad or miso soup as one would expect at a sushi restaurant, which was strange since it was provided in my previous visits.

The rolls were mediocre at best. I found the tuna rolls to be particularly fishy tasting, and not in a good way. The Dynamite roll had a nice crunchy texture and a far less fishy taste but still didn’t compare to the magic I’ve experienced elsewhere. The tempura at Ta-ke is really light – too light. It was so flaky that it crumbled all over myself and the table making it very hard to eat with any kind of grace.

Harvey and I were in pretty good spirits though (who needs to wait ’til midnight to have champagne?) so we just went with the flow, knowing we had a party to get to and this was just a short blip in our evening. Before we headed into the cold, I made a trip to the bathroom. That sealed the deal. YUCK! It was dirty and very poorly maintained. I think the state of your bathroom says a lot about the state of other parts of your home or restaurant – like the kitchen. I don’t even want to imagine what it’s like back there.

All in all, I would say skip Ta-ke. I know it was a quiet night but if you’re open, you’re open. You never know when someone is going to come in to review you.