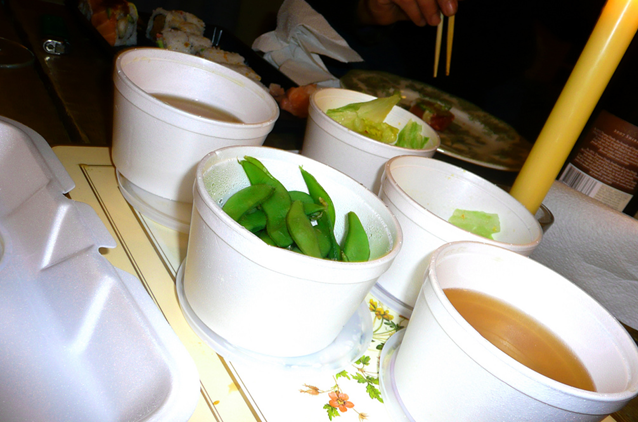 Last month I did a bit of crowd sourcing, and requested your recommendations for happenin’ sushi spots in the Limestone City.  My call to bear chopsticks seemed rather popular, as it received 10 solid responses and nods to local restaurateurs.  With a little help from my friends, and a desire to try something other than Asha, last Friday I took the plunge with some take-out from Sushi Ya.

Sidetracking ever so slightly, I’ve always been interested in the transformation of the urban cityscape.  I find it interesting to learn about what used to be in a given location, such as Modern Furniture, which was once a theatre, and our former second mall, the Kingston Centre, which is now a big box complex.  With respect to Sushi Ya, which sits at 768 Princess Street, the previous tenants were none other than Dixie Lee, vendors of fried chicken and other greasy dishes.  I am not certain about the exact amount of time it took to transform the restaurant from a house of deep fryers to a strange looking sushi hut, but I was admittedly apprehensive to try out Sushi Ya.

Armed with your recommendations and a hostess with a history of successful feasts at Sushi Ya, we placed a modest-sized order.  Sushi Ya was definitely on par with what I had come to expect in terms of delivery times from sushi restos such as Asha.  The wait lasted about an hour, and when you’re hungry or in a hurry, that can seem a bit too long.  Regardless, the hunger pangs melted away soon after the first bite.  Our order consisted of edamame, vegetable tempura, California, spicy tekka and something called the red dragon.  The latter was by far one of the best dishes we ordered, but overall the food was delicious.

Again, Sushi Ya was pretty comparable to my past experiences in terms of quantity, quality and cost.  That’s not to say that this restaurant is average, rather, if you’re like me and enjoy something new now and again, Sushi Ya is something I could easily recommend. My only criticism was that they did not send enough chop sticks, however we didn’t specify how many we required.  Otherwise, they were a bit stingy with their wasabi and ginger, but I rarely get enough of either, even when supplies are vast.  For a little glimpse inside out styrofoam take out experience, check out the photos over on Kingstonist’s Flickr.

2 thoughts on “Sushi Ya”