When you walk through the doors of Sir John’s Public House, you are stepping back in time into one of Kingston’s historic landmarks. Located at 343 King Street, this spot was home to the law office of the City’s most celebrated citizen, Sir John A. Macdonald, from 1849-1860.

With the Iron Duke, Brew Pub, Tir Na Nog, and the Toucan all only steps away, the Public House faces lots of competition; last Wednesday, two friends and I decided to see how Sir John’s measures up.

Labelled as a 19th-century Scottish pub, the expected atmosphere is achieved, from the rich paint colours and wood floors, to the red tartan bench covers, an impressive collection of malt whiskies, and Tennents on tap. Seasonal seating offsets limited square footage, which only allows for about 50 seats inside the restaurant. The space boasts a life-sized bust (circa. 1889) of Sir John A. himself, so the imaginative can feel as if they are drinking with Canada’s first Prime Minister. The Scotsman of the bulbous, tell-tale, nose was known to enjoy his Scotch whisky from time to time.

Upon arrival, we were greeted by a friendly waitress who informed us that a few minutes remained of Sir John’s Hospitality Hour where, from 4:30-5:30p.m. Monday to Friday, you can enjoy local drafts and rail shots for $3.54. Seizing the opportunity to enjoy a pint of Beau’s for only $3.54, we each ordered one. 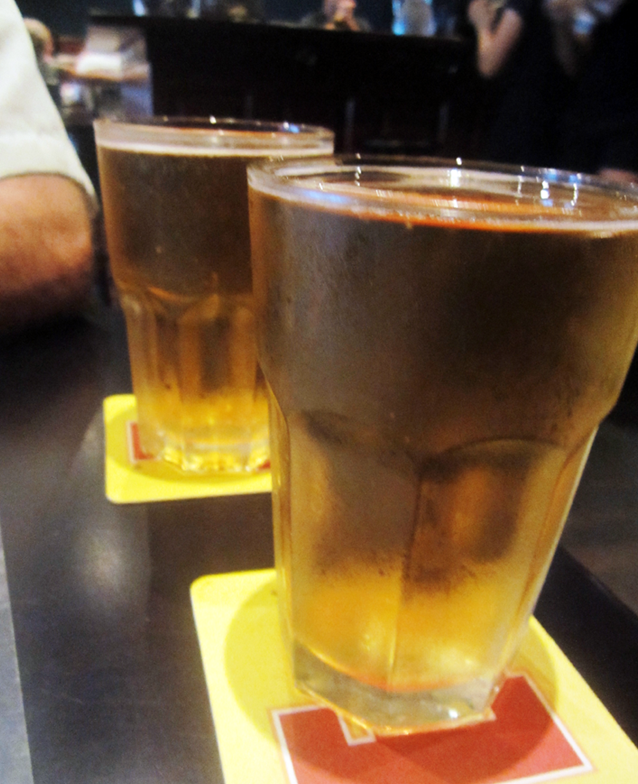 The Public House serves pub grub with a Scottish twist (e.g. poutine with Haggis) and a number of British favourites. One of the menu features is the three-course dinner for $20. I love a prix fixe menu, and I appreciated the fact that this one offered a lot of options: four appetizers, nine entrees (including a vegan option) and two desserts to choose from. I started with the Caesar salad, a generous helping of romaine, creamy dressing, croutons, parmesan and bacon bits. I loved the shaved parmesan and the real bacon bits, but my lettuce was almost swimming in dressing and I had a hard time finishing. My friend who had the garden salad commented that she was impressed with the variety of vegetables that topped the salad and said that it tasted fresh, not like it came from a bag.

Our other dining companion was more adventurous and opted for the deep-fried haggis fritters. Haggis, a traditional Scottish delicacy, is a savoury pudding containing sheep’s heart, liver and lungs minced with onion, oatmeal, suet, spices, and then mixed with stock. It is then traditionally encased in the animal’s stomach and simmered for a number of hours. I may be of Scottish ancestry, but I was not going anywhere near the haggis! An apparent fan of organs, my friend said the fritters had a crunchy outside and smooth, soft inside with the consistency of a pate or terrine. The fritters were served with a Piccadilly relish featuring cauliflower and curry. 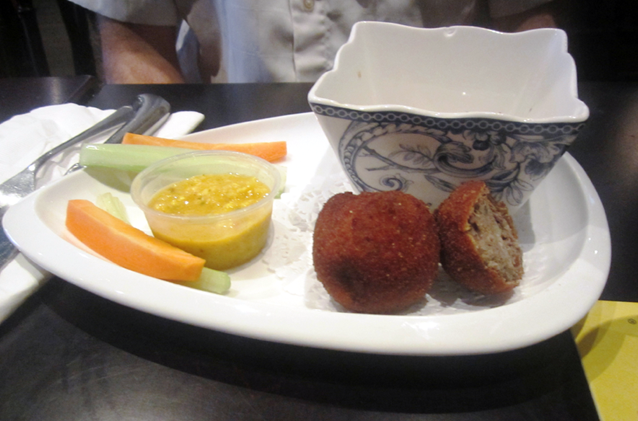 For our main, two of us ordered the Braised beef and Onion Rings: braised roast beef in rich gravy with onion rings, tatties and neeps (mashed potatoes and buttered mashed turnip). This dish had a few hits and misses for me. I thought the onion rings were oily and overdone; the turnip a bit bland. The mashed potatoes were a highlight with chunks of potato throughout, as was the rosemary-seasoned beef, which was tender and fell apart as you cut into it. However, my favourite element of the meal was the rich brown gravy, meaty and robust in flavour, smothering the beef. This was a huge portion of food and the dish itself had a homey and nostalgic feel to it like a home-cooked meal at Grandma`s. 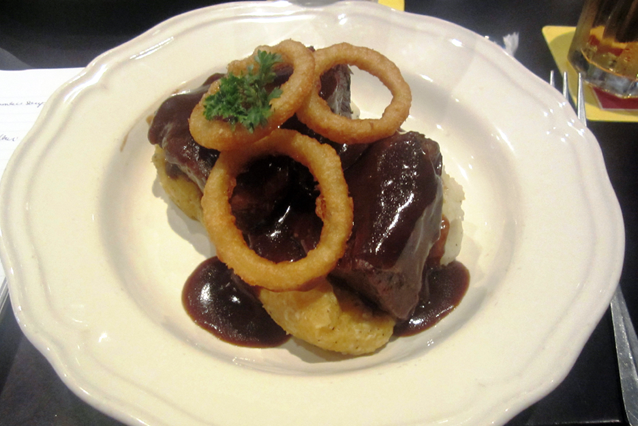 Next up was Sir John`s signature fish and chips– beer-battered red snapper with home-cut chips accompanied by tartar sauce and marinated cabbage. As you can see, the piece of fish was absolutely huge. The texture was perfect — crispy on the outside and flakey on the inside and the fish had a nice light, mild flavour that was complemented by the homemade tartar sauce and purple cabbage slaw that were served on the side. The fries were also good — salty and crisp. This dish was an all-around win. 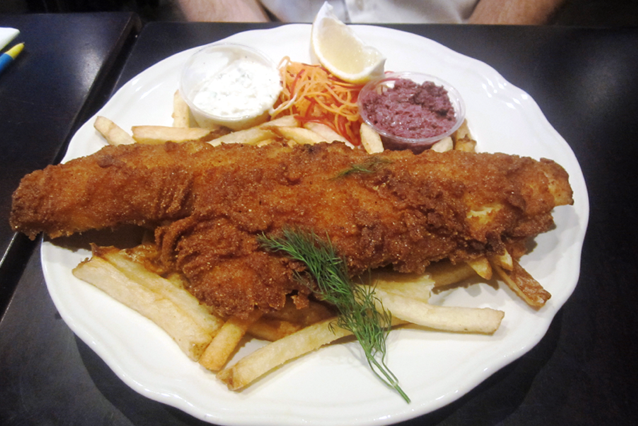 Already bursting from our appetizers and dinner, we (almost!) reluctantly moved on to dessert. The prix fixe offers a choice shortbread (a Scottish favourite) or an oatmeal cookie for dessert. I was expecting Walker’s shortbread and Dad’s oatmeal cookies, but what we got far exceeded my expectations. The two large shortbread pieces with real whipped cream and strawberries culminated in a crumbly, buttery heaven in my mouth. The cinnamon-spiced oatmeal cookies were the size of a dinner plate with perfect cookie consistency, hard on the outside and chewy on the inside. You could tell that both desserts were freshly-baked, and even though we took most of our dessert home to avoid stomach rupture, both were still delicious the next day.

Sir John’s has a few minor kinks to work out, but its unique dishes and historic atmosphere make it a welcome addition to the pub scene. And with huge portions and great specials, I think you may be hard-pressed to find a better food/price ratio in the downtown core.

Of course, Macdonald was knighted “Sir” for being more than just another man with a love of the drink: he was the dominant figure of Canadian Confederation, celebrated for bringing the colonies together and Prime Minister for 19 years. The pub that bears his name, if not his echo, would be a great place to get your friends together. 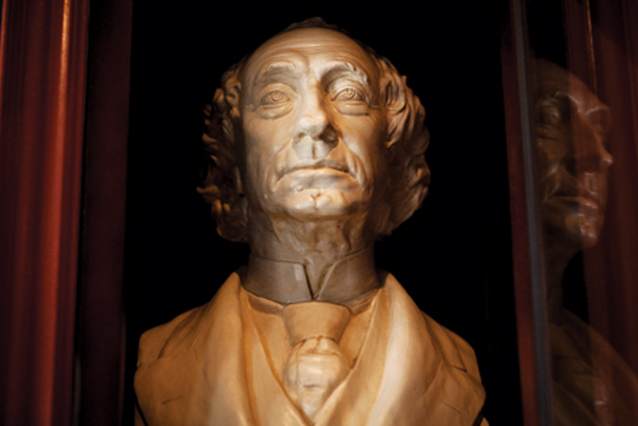