When it comes to take-out, Thai and Cambodian cuisine has dominated our plates and palates the past few years. The complex flavours and textures of the dishes are just something we have not been able to replicate at home. We frequent our downtown favourites, namely Royal Angkor and Pat’s, but one night after work we were in the west end and decided to give Siem Reap, located on upper Princess Street, a taste.

Several friends who live in the west end hail this as the best Thai and Cambodian food in the city, so I was curious to see what it was like. On a Tuesday evening, we decided to dine in. The restaurant wasn’t especially busy, but take-out was steady. Service was friendly and the food arrived quickly. 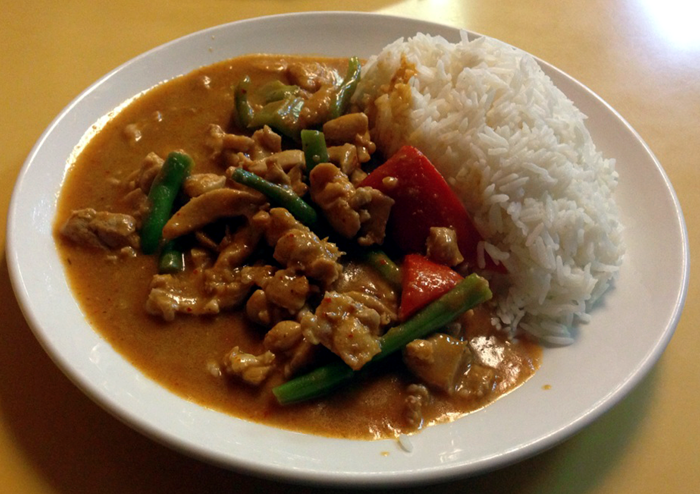 Siem Reap has many of the signature dishes you see at all of the restaurants downtown, but it also has a few unique options, including a pineapple beef and a yellow curry with beans with sweet potato. However, sometimes it’s hard to venture from your favourite dishes and trying them at different places offers good point of comparison. Golden chicken is Curtis’ go-to dish at Cambodian/Thai restaurants and it’s done slightly differently at each, ranging from saucy to more a dry rub. Siem Reap’s version (for $10.50) had plenty of sauce and but unfortunately not a ton of chicken.

While plentiful, the sauce didn’t have quite the bright, fresh flavour and spice he’s accustomed to. The golden chicken was advertised as three-chili pepper hot (with three-chili being the highest icon on the menu), but it would probably be comfortable for those of moderate heat tolerance; connoisseurs of spice might want to order it extra-hot. One thing that Siem Reap does differently with golden chicken is add fresh vegetables—red and green bell pepper and green bean. Together, they add a welcome balance to chicken, sauce and rice, and a nice crunch for texture.

I ordered the pad thai with chicken and shrimp for $10.50. When it came, I was immediately surprised to see amount of sauce on my plate. The sauce was good — sweet and savoury, but it was a bit watery and there was simply too much of it. I almost felt like I was eating a noodle soup. However, the noodles were cooked perfectly and the shrimp had a good bounce to them. 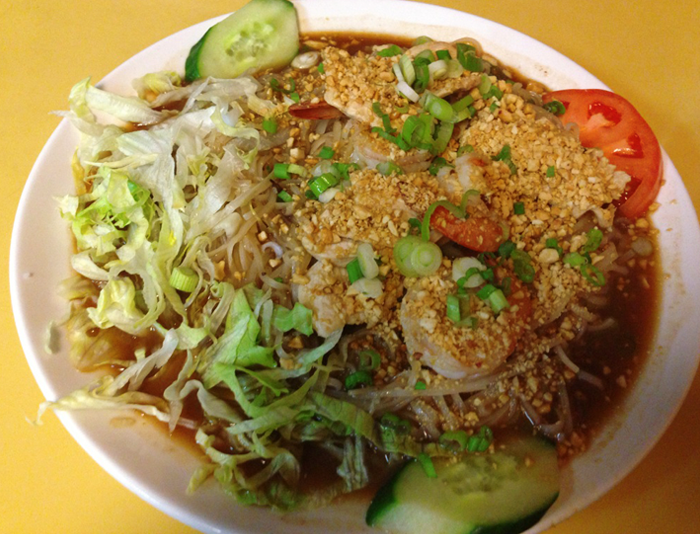 Another disappointment was that it was served topped with shredded lettuce, which got soggy pretty quickly, instead of the usual crunchy bean sprouts accompanied with a tablespoon of chili sauce. I felt that the texture of the lettuce did not add anything to the dish.

I speak for both of us when I say that we didn’t dislike the food at Siem Reap, but both just thought it was okay. Also, it was pricier and the overall portion sizes seemed smaller than at other places we’ve been to. Having left-overs is one of our favourite things about this type of food; rarely are we both able to completely finish our dishes in one sitting.

Maybe we ordered the wrong dishes? Maybe it was a bad night to go? I’m not sure, but Siem Reap definitely won’t supplant Royal Angkor or Pat’s for us. I hate to knock a local business, so I will say that we know several people who are no novices when it comes to Cambodian/Thai food and love Siem Reap, so perhaps you’ll have to give it a try and decide for yourself!