Last March, Kingstonians were dismayed to learn that The Sleepless Goat would be closing up shop once and for all due to insurmountable financial pressures. The popular cafe had been a downtown fixture for nearly 24 years, and as a result of that lengthy tenure, many of us couldn’t picture anything but the Goat operating out of their longstanding home at 91 Princess Street. Not too soon after the Goats bid us farewell, signs of life began to flicker at their former haunt, which subsequently underwent a much needed renovation. 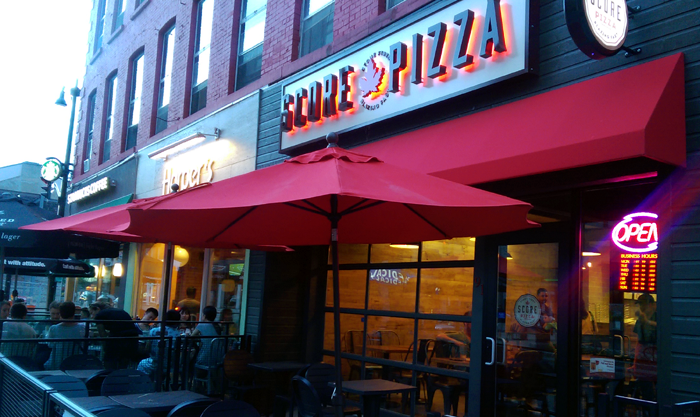 Fast forward to July, when downtown Kingston welcomed its newest addition, Score Pizza. Owned and operated by the same folks behind the west-end’s successful fast-casual establishment, Go Italian, Score was conceived as a high-speed, wood-fired pizzeria that would specifically cater to the lunch crowd. With pies priced slightly below what you’d encounter at neighbouring gourmet pizza restaurants, Score Pizza has positioned themselves as an affordable, fresh option for those on the go.

Score’s revitalized storefront is strikingly bold and a little bit rustic, perfectly blending in with the adjacent establishments. I couldn’t be happier to see that Score has also set up a proper patio with bright red umbrellas for customers who wish to linger and enjoy the hustle and bustle of lower Princess Street.  Stepping inside, patrons are instantly greeted by warm wooden accents, an array of seating options, plenty of light and a full view of the busy prep area and impressive pizza oven.

Employees behind the long counter encased in glass were quick to welcome us and explain how the pizza menu works. Essentially, you can order from a handful or signature pies (Margherita, Bar-B-Q Chicken, Great White North, K-Town, Hot & Spicy, or Veggie Fresh), or venture out into wild and build your own (BYO) using a vast array of toppings. With the 12″ regular signature pizzas and the most elaborate (ie pick as many toppings as you can handle) BYO pie ringing in at $11.25 respectively, they’ve priced things perfectly to attract customers. Score also offers a pair of salads, four wood-fired sandwiches and just enough drinks and desserts to satisfy all of your non-pizza related cravings.

On our first visit, both my dining companion and I opted to concoct custom 12″ pizzas. The BYO experience was similar to what you’d expect at a typical sub shop, where customers follow their creations down the line as employees assemble tasty toppings along the way. I was totally impressed by the number of sauces, cheeses, meats, vegetables and finishing touches that Score had on hand. There’s definitely something for everyone, including gluten free crust, meatballs, arugula and balsamic reduction. It took less than two minutes to get through the process, and that included helpful suggestions along the way regarding which toppings I absolutely had to try. 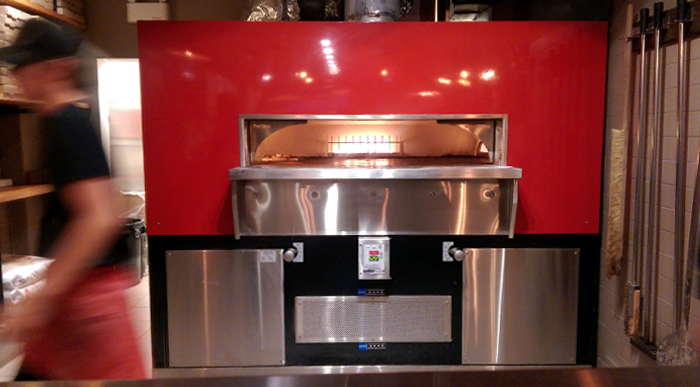 At the end of the line, pizzas and sandwiches are placed in Score’s crown jewel, a bright red oven that is roaring hot.  Customers are then given a number and invited to take a seat, however our number was called no sooner than we’d found a place to watch the action go down. With a cook time that was slightly over 2 minutes, had we been on the go, we could have been in and out of there in well under 5 minutes.  That’s an impressive point to highlight, as it will undoubtedly allow Score to compete against local sandwich shops, as well as other places with pre-made options and to-go counters.  For our first visit, we opted to dine in so that we could get slightly more acquainted with their setup and enjoy the ambiance.

From left to right you have the meat-based pizza with hints of vegetables, and the veggie pizza with meat garnish.  Having been made exactly to our respective specifications, there was little to complain about, and we were both pleased with the size of the larger 12″ pizzas.  The notion that Score Pizza is catering to customers on the run was further reinforced when we sought out our utensils and could only locate plastic options at the to-go station.  That’s certainly not the greatest offering from an environmental standpoint, and it’s something that they could easily improve.  Recycling and refuse receptacles were otherwise clearly labelled, making it a cinch for patrons to sort on the way out.

Score may not have unseated my personal fave for gourmet pizza in downtown Kingston, but they’ve undoubtedly earned a spot on my list of go-to places for pizza.  For well under $13 per person (sans beverages, etc…), with an inviting atmosphere and lightening fast food delivery, they could very well become a formidable force to be reckoned with.  The only question is whether or not that combination of lower cost and speed is the right recipe to thwart rent considerations, foot traffic, parking concerns and all the factors that plagued The Goat and countless others up and down the street.  Only time will tell, and in the meantime you should give Score a chance to win you over.

One thought on “Score Pizza”