It has been approximately 5 months since our last review of a local sushi restaurant, which is to say that it’s high time we explored another available option in the Limestone City.  While my obsession with sushi has slightly waned over the past year and a bit, I strongly believe that’s a result of the handful of gourmet burger and poutine establishments who’ve set up shop recently. Sushi is still big business in the downtown, with some relatively new players in the form of Niji, Kame, Sushi Q, and few, if any casualties by way of closures.  We’ve all got our favorites, but I’m always on the lookout to try something new, and expand our collective dining horizons.

When I think of buffet dining, I conjure up images of sneeze guards, stale items that have been sitting out for far too long, MSG headaches, and one common ingredient: the deep fryer.  Needless to say, when a friend suggested that we try out Sakura on Bath Road, my expectations were set pretty low and I feared the worst; that a bad experience would turn me off of sushi for months to come.  Sakura set up shop in an address that could not support a Nichol’s or a Shoeless Joe’s, but it’s been around for a while and been able to build a solid reputation.  After just one visit, I am happy to report that Sakura was far better than I could have ever expected, with fresh ingredients, fast and fancy preparation, and remarkable value.  In fact I’ve already been back more than once.

The restaurant is rather large in comparison to the competition downtown, with lots of private booths, bar-style seating overlooking the chef/prep-area, as well as an exciting teppanyaki grill that I intend on trying one of these days.  When you sit down you are presented with a menu, a pad of scrap paper and a miniature pencil to place your order.  You can order as much as you want, but the rule is that you should eat whatever you order and waste as little food as possible.  In other words, don’t let your eyes get larger than your stomach, else you’ll be paying extra.  The menu has a tremendous amount of variety, with a decent selection of soups, salads, appetizers, rolls, sushi, rice and noodle dishes and the list goes on.  Below you’ll find a select sampling of menu items that I’ve tried. 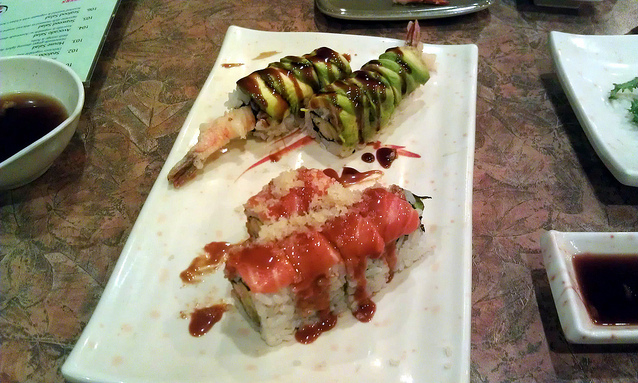 One of the great things about sushi is that the portions are bite sized, so you get a lot of different items on your plate and can easily share with and steal from fellow diners.  At Sakura you can order a few rolls of this, some tempura’d that, and keep on going until you can’t possible stomach another bite.  At about $20 per person, the all you cat eat sushi option offers great value, and again, an unbelievable selection of fresh menu items.  Having said that, the adventurous menu also has some strange offerings such as: salmon sushi pizza (167) and raw fish sushi pizza (169).  If you’ve driven by this place without giving it a real chance because you think, like I once did, that sushi isn’t meant to be served in an all you can eat format, you need to stop by.  It may not be the best sushi place in Kingston, but I would go so far as to say that it is a close runner-up.