With three busy locations, Saigon Delights is one of the most well-known Vietnamese restaurants Kingston has to offer.  The downtown/Bagot Street location is a personal favourite of mine, which always seems to have a steady flow of customers thanks to the proximity of Hotel Dieu and neighbouring bus stops.  Up until last week, I didn’t have a reason to break routine and venture to one of their other locations.  However, when old friends come calling with a hankering for Saigon Delights, specifically their spot on Division Street, I tend to oblige. 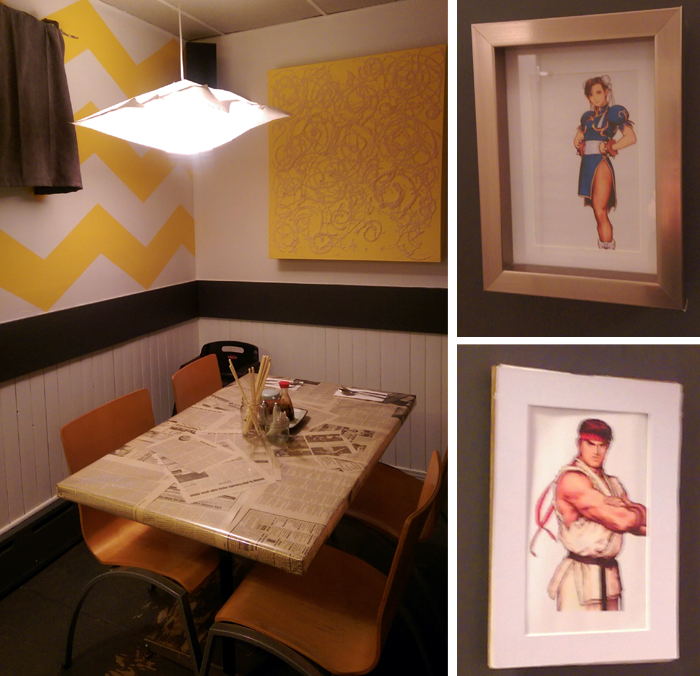 The so-called “Uptown” location is tucked away from Princess Street, just north on Division. While parking isn’t available right out front, customers will find ample free parking around the corner on neighbouring side streets.  From the outside, the two-storey red brick looks residential, which is sort of accurate as there are apartments upstairs. On the main floor you’ll find the modest restaurant, which is brightly decorated with yellow accents, paper lamp shades and fun tables that appear decoupaged with newsprint. It’s definitely more put together than the downtown location, and they earn serious bonus points for the Chun Li and Ryu pictures on the bathroom doors. 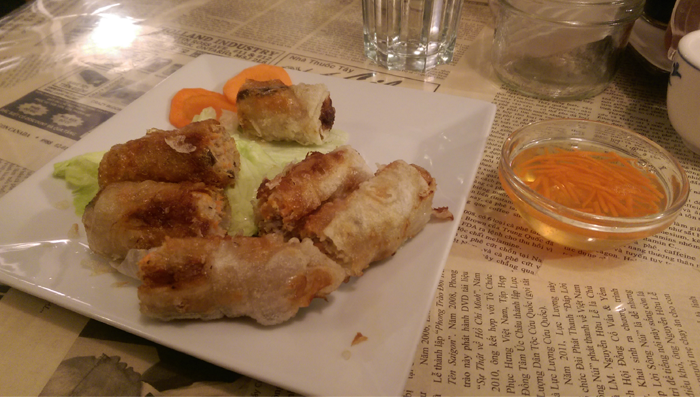 Saigon Delights’ website boasts that their spring rolls are “Kingston’s Favourite” with over 1.5 million sold to date. Such bold claims are rarely backed up, but in Saigon Delights’ defense, their spring rolls are very good. So good, you could go so far as to call these crispy gems the city’s best. Our table of three shared two orders (3 rolls/$6.63), and we were not disappointed. Similar to the service on Bagot Street, our appetizers came super quick, and the mix of minced pork and shrimp were perfectly seasoned. A handful of other appealing apps and meal-sized soups are also available, most of which are reasonably priced well under $10.  Vegetarians will undoubtedly celebrate their refreshingly crisp salad tofu rolls (#4, 3 rolls/$6.63). 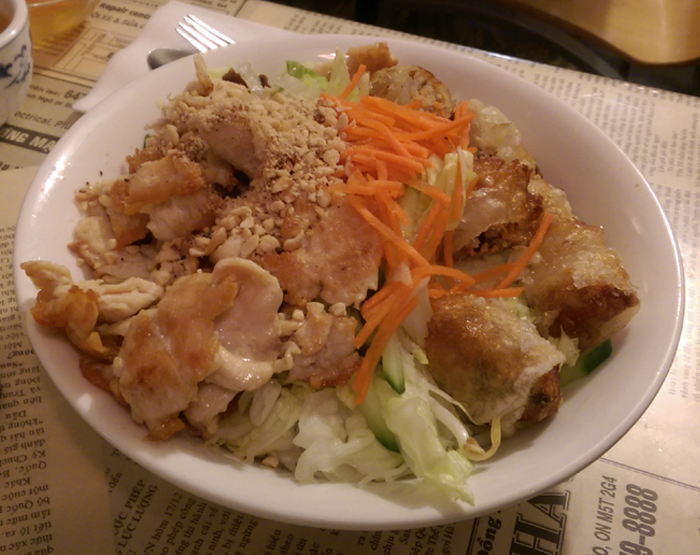 Our visiting dining companion opted for his go-to dish, #6 – Bun Cha Gio Thit Nuong (Boong Jay Yaw Tit Noong).  It’s listed on their menu as a signature dish of Vietnamese cooking and the “hands-down favourite at Saigon Delights”.   The rice-based dish is pilled high with your choice of grilled pork ($11.50), chicken ($11.50) or shrimp ($12.39), two spring rolls, fresh greens and roasted peanuts.  While the fresh greens may be somewhat lacking, as illustrated above, this dish is rich in satisfying flavour.  So much so, that our friend ordered a second helping to take out and enjoy later. 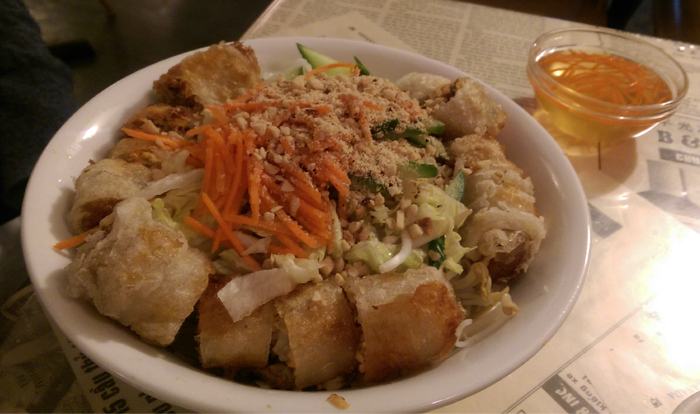 Next up was yet another dish topped with spring rolls – I’m beginning to see how Saigon Delights can back up their claim of 1.5 million sold.  The #5 – Bun Cha Gio (Boong Jay Yaw) ($11.50), is essentially #6, with Vietnamese rice noodles, three spring rolls and a side of Nuoc Mam.  This dish had a far more respectful helping of fresh greens, which had perfectly absorbed the sauce without being too mushy.  The noodles were also added bonus, as they were delightfully coated in sauce, yet they had a soft, chewy texture. 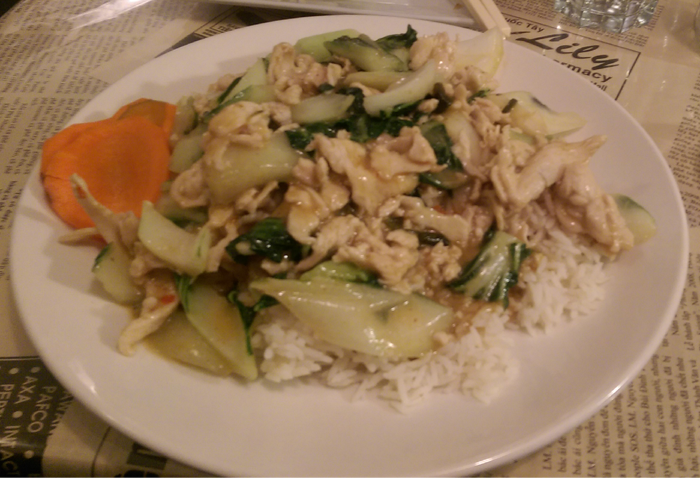 Last up was my #13, Com Thai/Com Xao Cari Xanh (Ga-ri Sun) (Chicken $11.50, Tofu $10.62). Touted as another ‘Saigon’ staple, this dish was recommended by our waitress who insisted that it would fulfill my desire for something really spicy.  Unfortunately, I felt that this green curry really wasn’t hot enough, however thanks to the application of a generous amount of chili paste from the dispenser on the table, my want for heat was satisfied. The #13 presents of a generous amount of chicken and bok choy with coconut milk, which melts into a bed of rice.  While I would certainly opt for this again, I would recommend asking the kitchen to kick the spiciness up a notch or two.

Running a restaurant downtown is a risky and expensive proposition. Operating two of the same restaurants 6 blocks away from one another, is even more of a gamble.  However, as time has shown, there appears to be enough of an appetite to sustain two Saigon Delights in such close proximity to one another.  Uptown Saigon Delights mostly caters a student population, as well as those who want to easily pop in for quick take out.  During our 45-minute meal, I spotted close to 10 hungry patrons and delivery services coming and going with multiple magical styrofoam mystery boxes in tow.  This spot is undeniably popular during peak meal times, and with fast and friendly service, you definitely won’t go wrong by paying them a visit.  They are a colourful and refreshing addition to this segment of Division, which is otherwise unfortunately dotted with payday cash advance gougers.