In case you missed part one of our coverage of last weekend’s Fare on the Square, don’t spoil the fun and read the reviews out of order. Thus far, we’ve featured delicious dishes prepared by Aqua Terra, Atomica, le Chien Noir as well as Curry Original. In part two, we take a look at offerings from three other local restaurants as well as one from a beef producer located in Tweed.  One of which ended up being our favourite dish, or in this case bowl, from this year’s event.  Enough build up, let’s dig into the second helping of Fare on the Square before it gets cold. 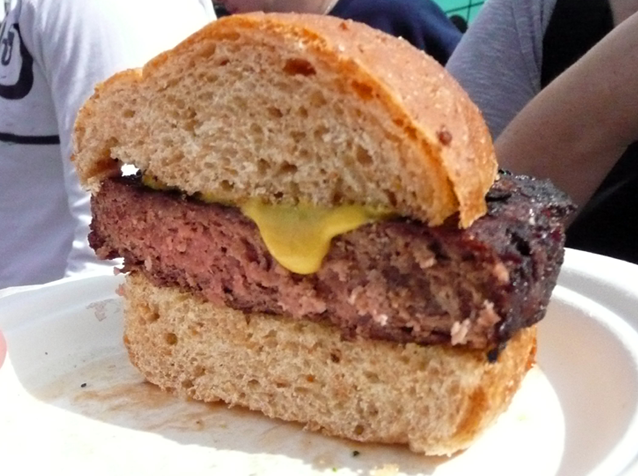 The Kingston Brewing Company is known for two things: micro-brews and greasy, beer-based bar food.  I am not a huge fan of their menu, however when I tasted the Brew Pub’s Bison Burger, my past misadventures at their resto melted away.  The bison, supplied by Pykeview Farms, was good and thick, amazingly moist, and cooked just the way I like it.  While I’m not sure who produced the bun, it was soft, chewy and helped to make my first Bison burger a memorable one.  Now if only they’d start selling these at the Brew Pub.  If they already do, please let me know. 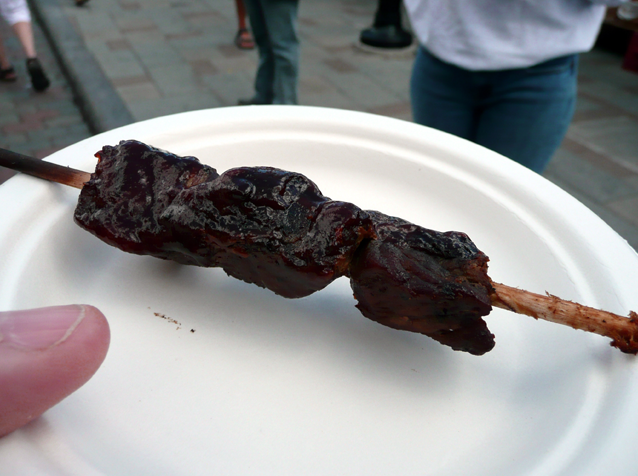 In addition to having their meat used by local chefs, Tweed’s Enright Cattle Company offered up their own treat in the form of Marinated Beef Skewers, with one of the tastiest BBQ sauces I have ever had.  The sauce struck the right balance of heat and sweet, and you could put as much or little on your skewer as desired.  I’ve yet to complain about the portions at Fare on the Square, but as you can see in the picture above, my skewer is missing a piece of meat on the right hand side.  I would have loved another nibble of this dish, but certainly not the end of the world. 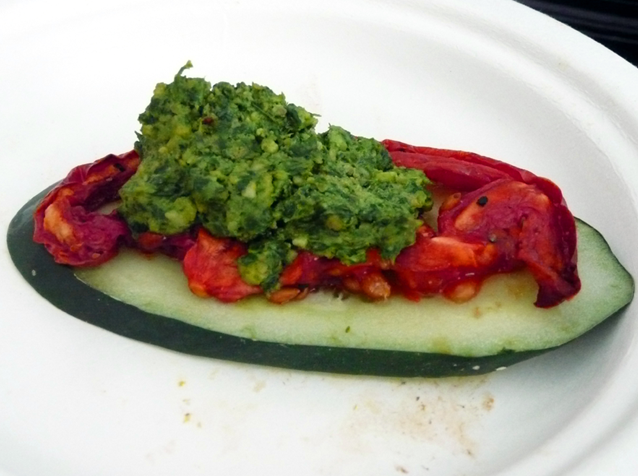 In part one I mentioned the severe lack of vegetarian options at this year’s Fare on the Square.  The Sleepless Goat also came to the rescue with an interesting looking dish, a Cucumber Roll with Roasted Tomato and Arugula Pesto, served with or without Chevre.  While we opted out of chevre on this one, I think it might have made the difference, which is to say that arugula pesto isn’t all that great all on it’s own.  I was half expecting the pesto to be laced with garlic, but in the end I found it a tad on the boring side, which is strange because I’ve never had a disappointing or unexciting meal at the Goat. 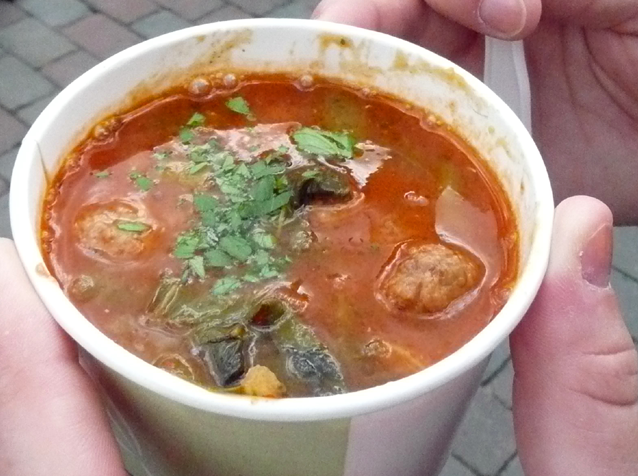 As you may know I’ve been to Olivea once, and while it wasn’t the best experience, I gave them the benefit of the situation and vowed to return sometime down the road. That time may have finally arrived thanks to their unbelievable showing at Fare on the Square.  Olivea’s chefs dished out bowl after bowl of their Italian Summer Vegetable Zuppa with Meatballs, which the chefs described as being filled with a lot of amazing goodness.  Between the two of us, we shared three bowls of the stuff, and as other returning diners in line agreed, it was hands down the best offering at this year’s Fare on the Square.  Way to go Olivea!

Unfortunately we didn’t get a chance to try out the dishes prepared by King Street Sizzle, Louis’s Country Bakery or Windmills. Nevertheless, Fare on the Square afforded me an opportunity to try out new restaurants, new dishes, and get re-acquainted with the local food movement.  Save for an ingredient here or there, I reckon an overwhelming majority of the menu was locally sourced.  It’s fantastic to know that local chefs are doing their part to support local farmers, and it’s comforting to know that we have access to all the seasonal fare, which is on sale each and every week at the Public Market.  While I will be sad to see the market close at the end of Fall, it will also mean that we’re one step closer to next year’s Fare on the Square.  Don’t miss it!