The slogan for Fare on the Square boasts “a feast from the fields”. This gourmet event, which is now one of my annual favourites, features a variety of treats for locavores and foodies alike.  In case you missed it, last Saturday a dozen local chefs offered up their tastiest dishes, which were comprised of locally-sourced vegetables by Patchwork Gardens, Havenhill Acres and Betty’s Byre, chevre from Old Farm, bison from Pykeview Farms and the Enright Cattle Company, and much, much more.  While we purchased 10 tickets with the intent of sampling 10 dishes, one of the offerings was so good we went back for more.  Who reigned supreme at this year’s Fare on the Square, and who fell short of our expectations?  Grab your fork, pull up a chair and strap on your feedbag as we dig in to part one of our latest culinary adventure. 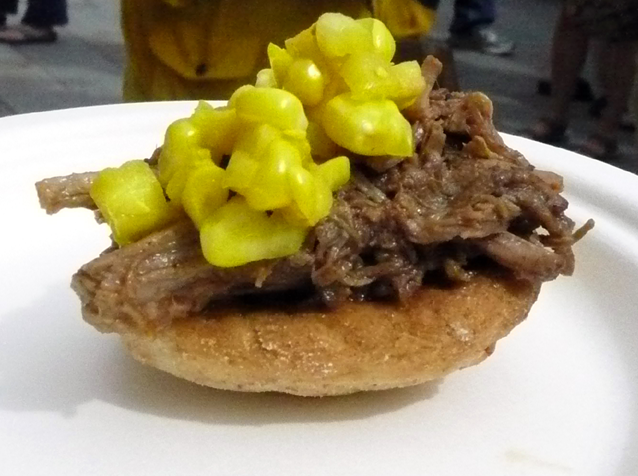 Our first taste from Fare on the Square 2010 was provided by Aqua Terra Restaubistro by Clark who offered up Pulled Beef on a Corn Biscuit with Corn, Eggplant and Shallot Relish.  This meat was amazingly juicy, and although it was not pork, it tasted as though it had come from a gourmet, neighbourhood pig roast.  The biscuit was soft, however it came across a bit dry for my liking.  Nevertheless it was delicious! 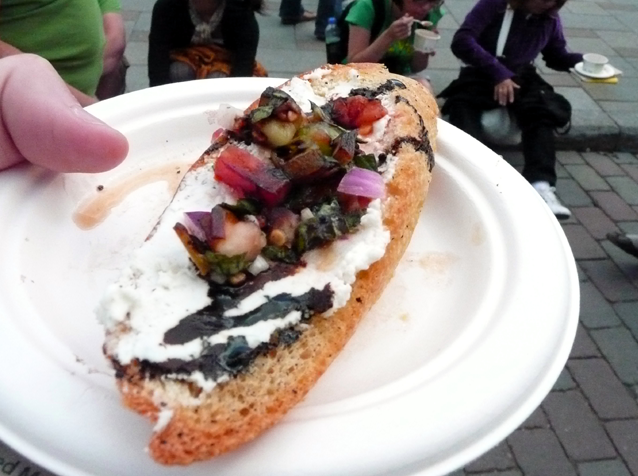 Second up was Atomica, one of my favourite gourmet pizza restos in Kingston.  Their kitchen incorporated local tomatoes into Bruschetta, with Chevre and a Balsamic Glaze. This was easily the second runner up to the best dish at this year’s Fare on the Square.  The bread struck a perfect balance between being toasted and having a chewy interior.  While I’m not a chevre connoisseur, each bite made me want to come back for more.  I could have easily spent all of my tickets on this treat, but I practised restraint so that this would be more than a two dish review. 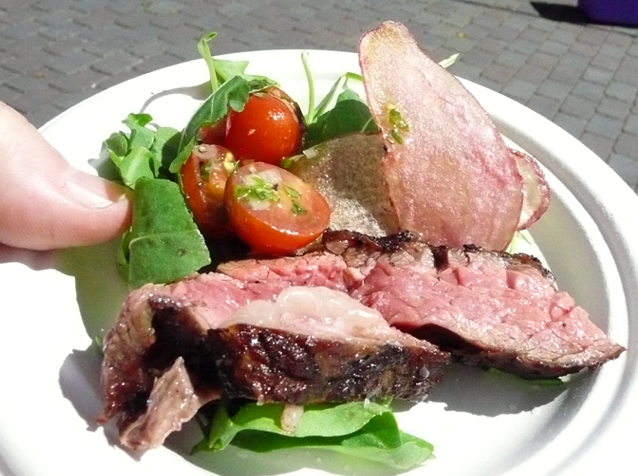 I admittedly judged Le Chien Noir’s Grilled Flank Steak with Marinated Cherry Tomatoes, and Roasted Pink Fingerling Potatoes well before the first bite hit my mouth.  This was easily the best looking dish at Fare on the Square, however something was lost in between the plate and my mouth.  Perhaps it was the fact that I could not cut the meat with my plastic utensils, or that they weren’t serving wine to go along with the steak.  In any case, although it did not live up to my expectations, it was still well worth the ticket.  A personal reminder for next year’s Fare on the Square, be sure to bring your own steak knife as well as a flask of Valpolicella. 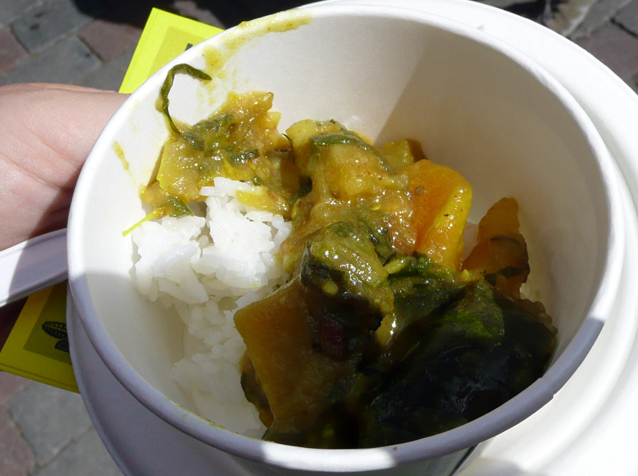 As you’ve probably already noticed, the vegetarian options were few and far between at Fare on the Square.  Curry Original came to the rescue with their Organic Mixed Vegetable Curry on Rice, which really hit the spot.  While I was warned that it was a terribly spicy dish, I found that it had just the right amount of heat, even for those who aren’t big fans of spicy foods. While I understand that none of these dishes are supposed to be supersized, I could have easily dealt with a heaping portion of this for dinner.  In fact, this inspired us to make curry the very next evening.

Tune in tomorrow for part two of our tastes from Fare on the Square, featuring dishes from The Sleepless Goat, Olivea, the Kingston Brewing Company and the Enright Cattle Company.  Again, we didn’t get to all the stations, so if you attended this year’s event, I’d love to hear what you enjoyed. Drop off a few comments below and let us know.