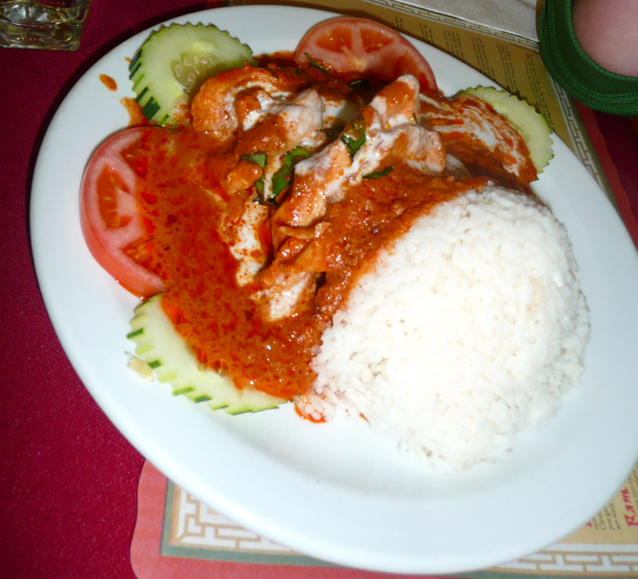 In case you haven’t noticed, Kingston is full of Cambodian and Thai restaurants.  Despite my 10 years of living here, I’ve only recently ventured into some of these establishments, the first experience being at Phnom Pehn nearly a year ago.  A friend of mine is an excellent chef and made me some incredible Penang one night for my birthday.  We got talking about Cambodian food and its enormous presence in Kingston and she told me that many of the restaurants were once owned by a man named Pat who established them and then sold them.  Phnom Pehn is one of these as are Wok-In, Cambodiana and of course, Pat’s Restaurant on Division.  My friend swore that this was the best of the lot.  I’ve been to a few and I’d say they are all fairly on par with each other.  No question that the Pad Thai at all of these restaurants is by far the best I’ve ever had anywhere.

Recently Harvey and I and four friends headed out to Pat’s Restaurant.  It was a very busy time, 5:30pm on a Friday but we were given a table immediately which was great considering our size and that we were in a bit of a time crunch.  We ordered our food within about 10 minutes of arrival.  Harvey, who loves to sweat when he eats, wasn’t sure what to order.  He asked the waiter what he thought would be the most suitable meal for someone who wanted chicken and extreme spice.  The waiter was very knowledgeable and was quickly able to make a suggestion.

The food took a little longer than we had hoped to arrive but the restaurant had also completely filled in the time we were there not to mention the constant flow of people getting take out.  It would have been nice if the food had come a little closer together, everyone at the table had food except for me for nearly 5 minutes.  Luckily it was so hot, it didn’t really matter anyway; by the time mine had arrived, everyone else’s had cooled enough to eat.

The flavours were exceptional.  The food used was clearly fresh and cooked to perfection.  The helpings were incredible, leaving every one of us to take home some leftovers (which, by the way, were equally delicious the next day).  The restaurant itself is quite simple and, I’m fairly certain, is run by a family.  The location is a little off the beaten path for those who like to eat downtown but is definitely worth the small extra distance.  The pricing is fair and reasonable and the staff are friendly and hard working.  I will definitely be visiting Pat’s again.  Or maybe it will be called something else if he decides to sell this one as well.  If so, I’m not worried about any kind of change in quality.  His other restaurants have lived up to the standards he initially established and I feel confident that this one will too.

Oh, and Harvey was very satisfied and sweaty by the end of the meal.