The rich and elegantly-spiced dishes that are found in Thai and Cambodian cuisine are some of my very favourites, and ones that I find impossible to replicate at home. Kingstonians are lucky to live in a city where the number of these moderately-priced, family-run restaurants rivals just about any other type of food, with the exception of Tim Horton’s and Subway.

Everyone who knows Thai and Cambodian food in Kingston knows or at has at least heard of the famous “Pat.” Pat has gained a B-list celebrity status in the area for opening a number of similarly-styled Thai/Cambodian establishments over the years, Wok-in, Cambodiana and Phnom Penh among them, and then selling them. In 2009, residents were delighted when Pat opened a namesake restaurant on Division St. as it implied that he might stay for a few years to dish up his famous dishes. Pat’s Restaurant was reviewed by Kingstonist in 2010, but in September 2013, it moved from its Division St. location to 455 Princess St. (former location of the Oriental Grocery) and we thought it was time for a re-visit. 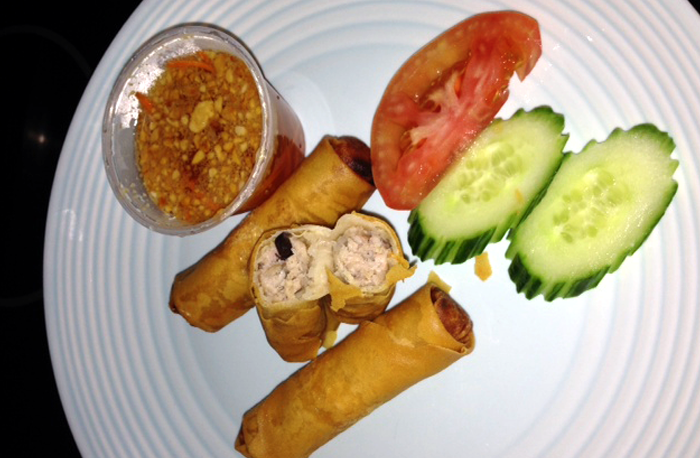 Originally, I had thought that the move was due to a desire to be in a more central, downtown location, but after talking to an employee I discovered that the owners of the Division St. building had other intentions for the space. While parking can be a challenge, the new location has plenty of seating. The decor is fairly simple, but there is a neat aquarium at the back with some pretty amazing looking fish!

I will be honest and say that Pat’s has not been my “go-to” place for Thai and Cambodian food in Kingston, but earlier this week a colleague gave me a taste of a delicious dish (Tofu and Pineapple) she had ordered for her lunch and I knew I needed to check it out.

Dishes at Pat’s range from $9.00-$12.50 (a bit pricier than some of the other establishments). And while they have the usual fare you will find at similar restaurants (e.g. Tom Yum Soup, Phanaeng Kai, Chicken with Coriander), they also have quite a few “specials” that actually are special in that I have not seen them before— e.g. Spicy Pad Thai with Beef, Onion and Vegetables and a Chicken and Pineapple dish with Black Bean Garlic Sauce. One minor annoyance is that Pat’s does not have a website, and the menu posted on menudb.ca is out of date and does not include all of their dishes nor reflect new prices. They do have a Facebook page that they regularly post pictures on; it would be great if they could upload their menu on their page.

Since I’ve heard that on Saturdays evenings it can be tough to get a table, we decided to get take-out and it was ready within 15 minutes. Service was very friendly. 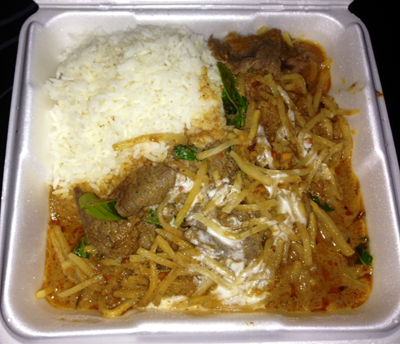 First up, we ordered the Cambodian Spring Rolls ($4.50), which consisted of three deep-fried rolls, sliced cucumber and tomato, as well as a dipping sauce (Nuoc man). The rolls were hot and crispy, and while slightly smaller than those at similar establishments, the filling was well-seasoned and contained a lot of meat. I didn’t love the dipping sauce, finding it tart rather than sweet. It tasted a bit too vinegary to me.

My main was the Yellow Curry Beef— sour yellow curry with beef, bamboo shoots, peanut, and coconut with rice for $12.50. It had an interesting flavor ? a tangy spice that was definitely not sweet, which is what usually go for. I know the colour of it doesn’t look appealing at all, but the curry tasted fresh and the texture was excellent, with lots of bamboo for crunch and a generous portion of tender beef. There were also sprigs of fresh herbs/leaves distributed throughout. While this was not a top 10 curry that I’ve had (I realized I’m not a fan of the sour curry and prefer the sweet), if you happen to prefer sour curry then I bet it’ll be right up your alley. It was a great mix of contrasting flavours, textures and temperatures and it was a huge dish— enough for at least two meals. 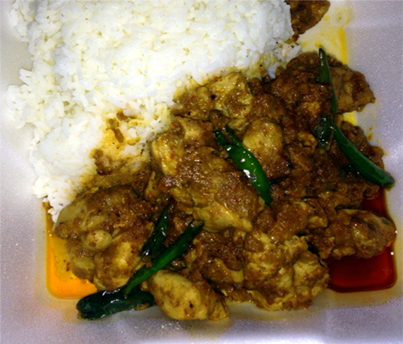 Curtis’ “go to” dish at Thai and Cambodian restaurants is the Golden Chicken. At Pat’s the dish consists of spicy hot and sour chicken with lemongrass, peanut, and coconut with rice for $10.50. The spicy dish came with a good-sized portion of tender chicken and rice, but not a great deal of sauce. However, the sauce that was there was phenomenal with the fresh lemongrass adding a bright and fresh flavour. It is advertised as spicy and does have a kick, but not so much that is overwhelming. This dish was impressive and satisfying.

In the end, I’m not sure if Pat’s will become my “go to” place for Thai and Cambodian food (#21 at Royal Angkor is still my absolute favourite dish and my loyalty is strong), but I will definitely be back to sample some more dishes, especially some of the “specials.” Pat has dished up another winning restaurant and I encourage you to try it out!