Skip to content
June 28, 2011September 21, 2015 Harvey Kirkpatrick
Pasta Shelf (downtown) is permanently closed. Looking for a place that’s still open? Check out our restaurant reviews and recommendations for establishments that are still open and serving great food in Kingston.

What makes a restaurant an institution? I have sparingly used the complimentary term in past reviews of dining establishments that have been around for generations. Places such as Morrison’s fall into this cherished category, as they are as popular today as they were ten, twenty or however many years ago. There’s really no specific milestone restaurants have to realize in order to get there, rather when they get reach institutional status, locals have likely been in the know for years. For well over a decade, friends have recommended the Pasta Shelf located at 1749 Bath Road, citing their homemade pasta, pizza dough and affordable take away Italian family meals. Is the Pasta Shelf an institution?  I can’t be sure, however with the addition of their new downtown location, the Pasta Shelf has begun to share a secret of the west-end to a new, hungry audience. 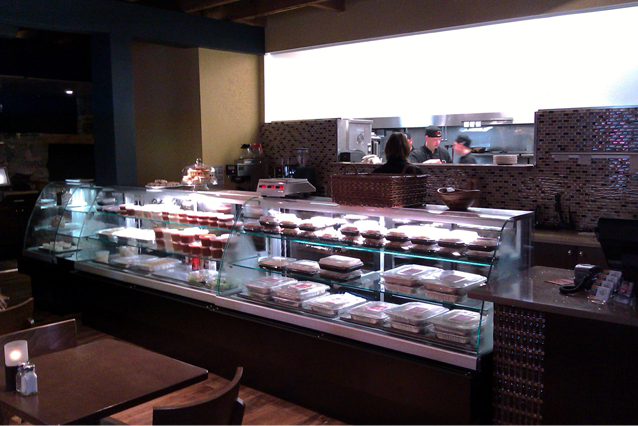 The location that formerly housed Stoney’s has been vacant for years, while half of this space was transformed into the Raging Bull steakhouse, the prime corner location sat empty until one month ago.  While I have only driven by their establishment on Bath Road, the downtown Pasta Shelf appears to be more polished, as it must now compete with the likes of Franky Pesto’s, Woodenheads and others outside of the category of Italian cuisine  The modern interior blends warm wooden accents with limestone walls and intimate candlelight.  It also stays true to the roots of the original tortorria with a massive display case for take and bake meals, sauces and pasta. 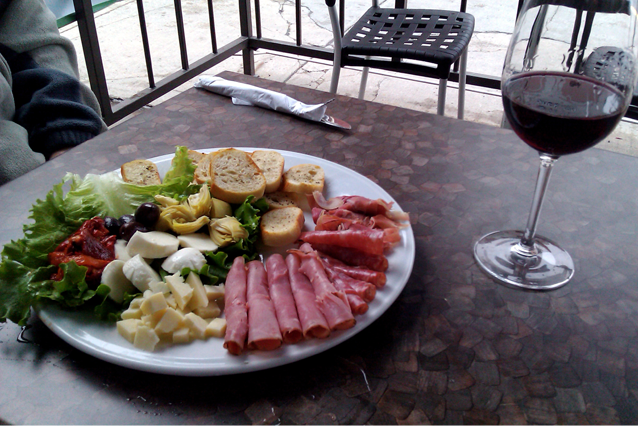 It being summer, we opted to sit on the spacious patio, which has always been a hit for patrons looking for prime outdoor real estate along Ontario Street.  Normally I wouldn’t order something as elaborate as the Antipasto for Two ($8.99) as a starter, but I wanted to venture beyond the usual caesar salad.  The antipasto consisted of a generous plate of proscuitto, genoa salami, cappicollo, asiago cheese, bocconcini cheese, roasted red peppers, kalamata olives, artichoke hearts and crostini.    While I loved pairing bites of roasted red peppers and salty proscuitto, I found the bocconcini rather bland. Next time around I will likely start out with the faithful caesar salad ($4.99/small, $6.25/large).

For my main, I opted for the Pasta Shelf’s Meat Lasagna ($9.49/lunch size, $11.49/dinner size), which is oven-baked with layers of noodles, meat sauce, melted mozzarella, parmesan, and ricotta cheeses.  The lasagna has an abundance of rich tomato sauce, which I soaked up with the large slab of crusty garlic bread, which they serve on the side.  In comparison to other lasagna’s I’ve enjoyed, this ranks up there, which should really come as no surprise given the fact that everything, including the pasta, is made in house with “old country” recipes.  I’m comforted by the fact that I can conveniently pop in and pick up individual ($6.79) or family sized ($19.99) take and bake lasagnas (meat or vegetable) whenever I get a hankering. 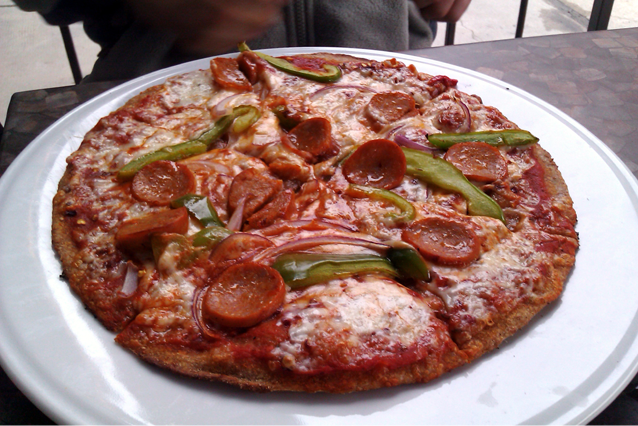 While the pasta was a highlight, I can’t say the same for the pizza.  This is the Hot and Spicy ($7.99 for the 8″, $11.49 for the 10″), which is dressed with tomato arrabiatta sauce, hot Italian sausage, green peppers, red onions and mozzarella cheese.  Although the pasta shelf makes their own pizza dough, the toppings lacked a real punch of flavour, and were far from being either hot or spicy.  Having said that, I am a pizza fiend, so I would definitely give one of their 17 varieties of pizza a second try. As underwhelming as the pizza was, it’s also a bit disappointing Pasta Shelf doesn’t offer them as a take and bake meal option.

Overall, Pasta Shelf offers classic, homemade Italian cuisine at an affordable price. While it’s definitely a polished version of their Bath Road location, it faces a definite struggle against the more upscale downtown competition. While time is the ultimate test, I’m not sure that the downtown location will be able to replicate the same amount of success as the original, west-end tortorria.