A few weeks ago, I was asked to plan a retirement luncheon for a colleague at work. When I asked where she wanted to go, she was adamant that the all you can eat buffet at Panda Garden would be divine. While I had something a bit more formal in mind, far be it for me to deny the last request of a co-worker. Needless to say, having never stepped foot inside Panda Garden, I was sceptical as to what to expect. Save for the Mandarin chain of buffet restaurants, my experience with Chinese and Japanese buffets paints the usual picture of salty, greasy food that’s been sitting out far too long.  Add to that decor that would make the 70’s blush as well as steep prices, and you can appreciate my reservations.  I am happy to report that the quality of the fare offered by Panda Garden, as well as the atmosphere, exceeded my expectations. To such a degree that I’ve already went back for seconds.

Located at the Kingston Centre, there is ample parking on the doorstep of Panda Garden. Both times I’ve visited, two tour buses have pulled in, but as the restaurant is well laid out, you won’t feel crowded. As soon as you enter, you’ll notice the wonderful glass mural in the lobby and very modern decor.  There are 3 separate dining rooms, which helps when bus loads of customers pull in. Of course, as soon as you’re seated, you are free to jump into the buffet, which is equally as spacious, and packed with Chinese, Japanese and Canadian menu items. 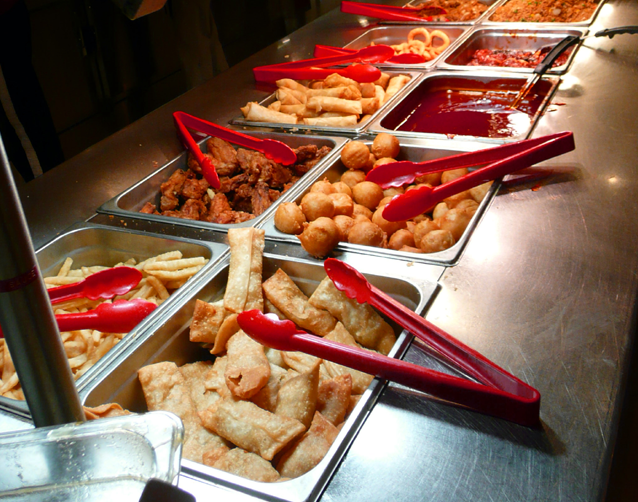 Panda Garden’s buffet has all the traditional dishes you’d come to expect. Everything from steamed dumplings and fried rice, to beef chow mein and General Tao’s Chicken. Personally, when I have a hankering for Chinese food, I look no further than fried rice and General Tao’s, while Panda Garden definitely knows how to cook both dishes to my satisfaction.  In addition to the fried fare, there is also a great selection of soups, fresh salads, and enough seafood to sink a battleship.  On both occasions, fellow diners commented on the outstanding quality of the wonton soup.  All hot dishes are kept warm, and everything is regularly re-stocked, so you can get as much of your favourite dish as you want during the meal time rush.  It’s also worth pointing out that their menu is free of MSG. 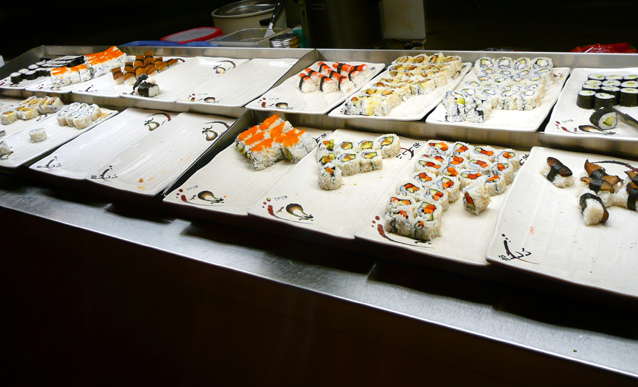 Panda Garden also does Japanese dishes by way of various sushi rolls, although I couldn’t build up the nerve to sample any of them. Otherwise, while I chose another helping of dumplings over dessert, Panda Garden has a pretty decent lineup of cookies, cakes and ice cream as well.  As a kid, I recall ice cream was the best part of these types of buffets.  In the end, lunch at Panda Garden costs a whopping $10 per person, which is more than fair considering the food quality and selection.  We joked that we had to be careful about this new found indulgence, as becoming a regular at an all you can eat buffet could easily have some undesirable effects on the waistline.  That said, I think we’ve found a great alternative to ordering take-out from VIP.  I”ll definitely be back again soon.