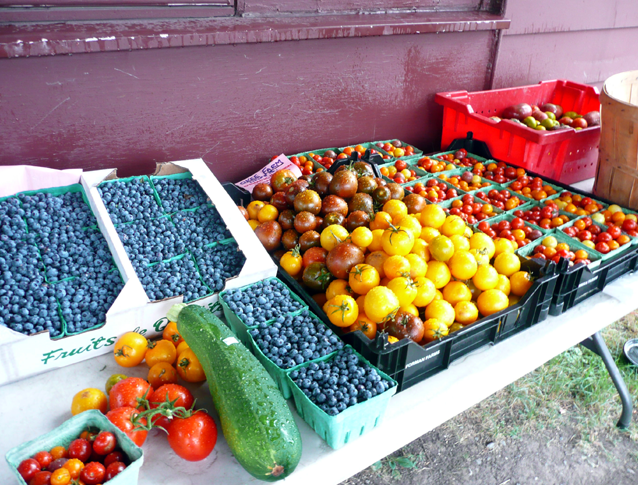 Old Farm Fine Foods opened its doors on Barrie Street about three years ago and has been a welcome addition to the local food movement ever since.  Owner, Nancy George relocated from Victoria, where she ran her own restaurant and apprenticed at the award-winning Marina Seafood Restaurant.  Eight years ago she and her husband Steve France moved to Kingston and began farming on a century old farm on Highway 15 where they now produce 400 varieties of heirloom tomatoes as well as honey, herbs and other vegetables.  In addition to the store on Barrie Street (just across from Sydenham School), the couple also runs a booth at The Kingston Public Market, The Farmers’ Market at Queen’s and various other markets out of town.

Nancy and Steve strive to grow as much food as they can and to buy the rest from other local farms.  In addition to providing fresh, local and organic produce and meats, Old Farm also has an array of pre-made fresh and frozen items to take home for dinner.  Some of these dishes include a variety of soups and dips as well as entrees such as chicken curry and enchiladas.  On market days you can pop by their booth for a quick spanakopita, samosa or empanada.

I stopped by the store with a rumbling stomach on one of our few rainy days this summer.  The store is quaint and welcoming with fun pictures (one I particularly enjoyed is of a chicken wearing an apron that says “I love vegetarians”) as well as artwork from local students thanking them for their support.  The choices were overwhelming, but in a good way.  My mind was suddenly swimming with thoughts of what to make for dinner with all this beautiful food.  My choices ranged from Lyon’s Family Farm turkey and Wallace beef to Patchwork Gardens produce such as green beans and a variety of lettuces and carrots.

There are also lots of prepackaged organic items like Bueno Coffee, Camino sugar, Jian’s Mix, preserves, and lots of gluten-free snacks.  I was impressed to also see a decent offering of ice cream flavours.  After taking all of this in, I then got to work deciding what to buy.  I checked out the front counter where I found freshly made sandwiches, artisanal cheeses and, what I ended up taking home, a beautiful sausage and potato quiche.  I also left with some local, organic, lean ground beef.  My grand total was just over $9.  The quiche was delicious and enough food for two meals if you add a small salad making the pricing was rather reasonable.

It’s exciting to see shops like this popping up around town.  The local food movement in Kingston is strong but it is still more of a task to find local, organic meat and produce than it is to just stop in at the nearest grocery store.  Shops like this are helping to close the gap and making these foods much more accessible for the general population.  I’ll be visiting some other similar shops over the next few weeks.  As always, we try to cover as much Kingston territory as possible, so if there’ s a shop near you that you would like us to visit, please let us know!