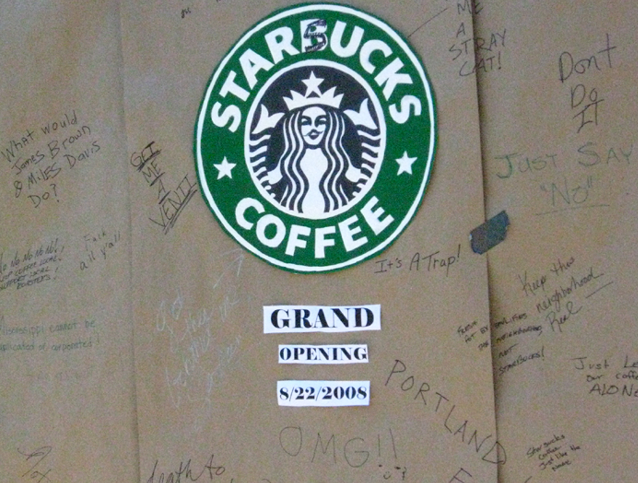 Many folks in the former Steeltown used to joke that you could not make a left turn anywhere in the city without passing by a Tim Hortons. Nowadays, that’s actually not too far from the truth in most of Canada’s urban areas, while Kingston seems to gain one new store per year.  Recently the Limestone City went one step further with an announcement that Timmie’s would construct a new $45-million distribution centre on 58 acres in the St. Lawrence Business Park.  With a cult following that is hard to explain, you’d think that Tim’s had cornered the local java market, but then there’s Seattle’s big brand who charges upwards of five times as much per cup.  With yet another new location opening up in Kingston, I’m getting a little tired of Starbucks.

A few months after we published our first post in the series that looked at the state of downtown Kingston’s store vacancies, closures and potential openings, Second Cup pulled out of their choice location on the corner of Princess and Sydenham.  For a brief second I was cautiously optimistic that Coffeeco would jump at the opportunity, but sadly, it wasn’t meant to be.  So there it was, another downtown storefront with windows darkened by crate paper and a for lease sign on display.  Fast forward to October 2010 where a handful of those downtown commercial vacancies have become home to deep fryers and burger joints, while the emptiness at the aforementioned corner will be filled by yet another Starbucks.  I guess we can’t have our cake and eat it too.

If you take one step back onto Princess Street, and carefully watch out for traffic, you’ll quickly notice that Starbucks already operates a franchise two stores up from the corner, on the second floor of Indigo.  While I’ve been unable to confirm whether or not this cafe will remain once the new franchise opens, I wouldn’t put it past them to keep both in place.  It wouldn’t be the first black eye Starbucks has given downtown Kingston, as one of their first stores opened two doors up from our beloved Sleepless Goat.  I can still remember the fresh paint on that store’s window, which read something akin to “Starbucks kills babies”.  In any case, thankfully the Goat’s loyal clientele aren’t the sort who are swayed by the competition, or their instant coffee.

So why am I so perturbed by yet another Starbucks?  I guess it comes down to choice, or rather a lack thereof.  If the local coffee market is saturated by any single brand, it makes it really difficult for independent shops like Coffeeco, the Mug and Truffle and all the rest to compete and prosper.  One of my favourite things about visiting other cities is trying out and supporting restaurants that we don’t have in the Limestone City.  I would hate it if visitors to Kingston saw nothing but familiar brands and logos in our downtown.  Perhaps my quaint vision of what downtown Kingston should resemble is too idealistic, and I admit that I crave some of the chains from time to time.  That said, without places like Sima, Megalo’s and even the Brew Pub, we would be indistinguishable from every other city.

Special thanks to eyeliam for today’s photo of la resistance in Portland.

50 thoughts on “Not Another Starbucks”