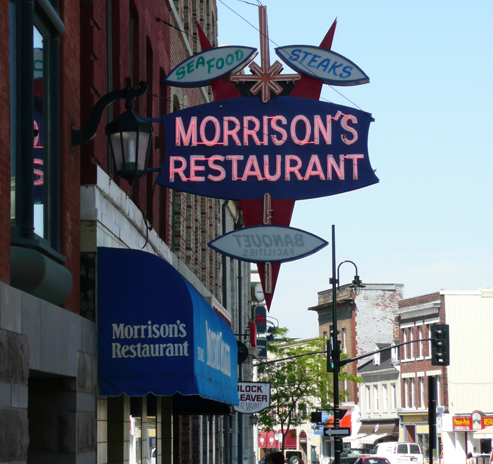 If ever there was a Kingston institution, it would have to be the greasy spoon known far and wide as Morrison’s Restaurant. Located on King Street, Morrison’s enjoys prime real estate that looks out onto Springer Market Square behind City Hall. The street-side marquee is an awesome throwback to yesterday, while the retro interior is similarly aged to perfection. A classic, casual diner, Morrison’s is always buzzing with activity, and the constant clatter of dishes and cutlery in one of the cities most active kitchens. It’s as well known as many of the historic landmarks in the area, and you either love it or hate it. As shocking as it may seem, I was surprised to find out that there are people in Kingston who don’t like Morrison’s!

I met up with a friend for breakfast this past weekend, and Morrison’s was jam packed. We were offered space at the counter, but we elected to wait for an available booth, which took less than 5 minutes to clear up. Our waitress was prompt and polite, taking our order with the old school pen and paper system, and returning immediately with hot coffee and cream. Our meals were delivered within 5 minutes, and she apologized for the wait. The standard breakfast fare and coffee helped coax me into the day, which had otherwise been clouded by the inebriated state that remained from the night before. Somehow I managed to come away from my Morrison’s visit without enjoying their famous milkshakes, but I watched as shake after shake was churned out for the eager breakfast and brunch crowd.

When it was all said and done, the damage was less than $10, which included a very nice tip. My friend and I stayed to chat long after our places were cleared up, but to my dismay, we were never offered a second cup of coffee. This is owing to the fact that our server was quite busy, and she may have wanted to get us in one door and out the other as quick as possible. Morrison’s trademark is that you can get a cheap meal served in no time at all. Hence the servers are going a mile a minute, and don’t necessarily have time to pay too much attention to you if you’re already seated and eating.

Generally speaking, this is the complaint that I have heard from a few people while discussing our various experiences dining over the years at Morrison’s. Some people prefer breakfast spots where the staff are overly attentive to their needs, checking in to ensure the meal is beyond satisfactory, and that your caffeinated beverage is constantly topped up. Although I don’t mind a second cup of coffee from time to time, I also hate it when my server asks me how my meal is while the first bite is still being chewed. I suppose the casual service and simple food is what keeps generations of Kingstonian’s going back to this nostalgic institution. What do you think about Morrison’s? Whether you love the milkshakes or hate the service be sure to let us know!