Our annual ‘best of’ series always tends to showcase our contributor’s latest gastronomic adventures, reinforcing Kingston’s enduring love affair with the local food scene.  2013 wasn’t any different, and as you may have noticed in our current review of the past year’s top trending stories, food trucks emerged as a decided focal point, attracting both mouth watering excitement and careful criticism.  Meg’s balanced exploration of the food truck scene considered the impact that these mobile purveyors of gourmet fare have had on traditional brick and mortar dining establishments, their sustainable advantages as well as their tireless promotion of locally produced ingredients.  While our gourmet local food trucks have all gone into hibernation for the season, one thing’s for certain, for better or worse, we can expect them (and more) to roll back into Kingston in 2014.
—————————— 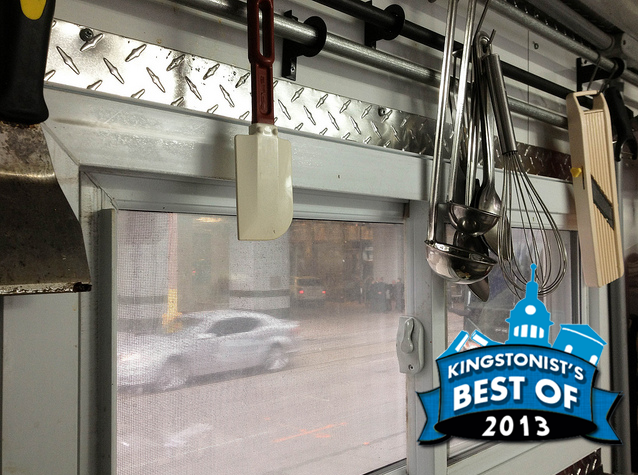 Trailer fare has steered into a fresh new direction with an undeniable facelift, transforming your average chip trucks into slick mobile eateries as top chefs trade restaurant kitchens for the tight squeeze of mobile cooking quarters. Gone are the deep-fried chips and corndogs, in are gourmet dishes that you would normally find in an upscale sit-down restaurant. Canadian cities continue to adopt the mobile truck trend as increasing mobile eateries dock curbside to serve specialty cuisine. Kingston’s on the list this spring as we welcome the movement into the downtown core and prepare for Kingston’s first gourmet food truck.

It’s no secret Downtown Kingston prides itself on locally owned restaurants and for the most part, has continued to maintain its historic and elegant appearance, keeping the major franchise restaurants away from the heart of downtown or otherwise neatly blended into our limestone buildings so not to scream franchise food.

Newcomers Milestones and Jack Astor’s caused a stir, arguably threatening Kingston’s now sustainable focused core as four local destinations; The Pasta Shelf, Aroma, Zappa’s and Tango almost simultaneously closed down. To blame those closures on these restaurants moving in is up for debate, however, it does show the risk associated with interlacing the downtown core with these major restaurant franchises.

The question becomes, do food trucks pose the same risk?

The controversial debate exists throughout North American cities as restaurants fight to keep a radius surrounding their front door clear of booming mobile eateries and lean on laws that prevent trucks from operating on public property. However in Kingston’s case, the mobile food movement does not appear to be a threat to the local bistro scene but instead a welcomed and anticipated addition to the Kingston nucleus. In fact, food trucks could be the next big thing in Kingston that will further promote local sustainability and add some positive zing to the growing metropolis without taking away from our lakeside sophistication.

Food trucks are a great competitor in sustainable innovations and, arguably, increasingly more esthetically appealing as the movement continues to roar. With a reputation of traveling to different locations throughout the season, it’s true food trucks emit greenhouse gas emissions. However, compared to traditional restaurants, their carbon footprint remains pretty small. In fact, despite the need to run generators, the mere size of a food truck forces them to preserve water and electricity, keeping the eco-footprint relatively small as well. They have the potential to be eco-friendly Green machines.

Call them what you want, but the trucks have the ability to support the local economy and in Kingston’s case, provide an outlet for local farmers and bring the community together alongside our sustainability objective.

Kingstonians and Kingston entrepreneurs have responded positively and appear to support the mobile food scene about to spice up the downtown core. It shows on social media, in particular the response to Farm Girl Mobile Food Co., 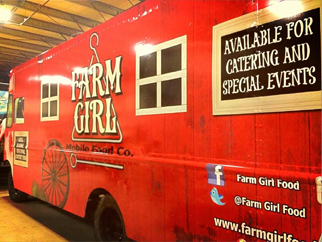 Kingston’s first gourmet food truck geared to serving homemade rustic cuisine using only the freshest local produce. With an ever budding list of over 500 followers, tweets from Kingstonians alike illustrate just how keen the city folks are to have the 18-foot self-sustained mobile food truck out on the streets for business.

Farm Girl is a prime example of how the food truck cult has more to offer than just the convenience of meals on wheels. Of course, the potential to be eco-friendly relies heavily on the vendor, but sustainable practices make them a good addition to communities.

It is true not all food trucks are geared toward freshly sourced produce and may not carry the biggest eco-footprint; however what remains fact is trucks don’t depend on elegantly lit seating to please their patrons. Cutting out dining areas saves a wad of electricity, not to mention a lot of green space.

That being said, in a matter of weeks we will see how Kingstonians take to Farm Girl curbside. Locavores dedicated to eating locally tend to remain loyal to the community and continue to eat where sustainable initiatives have been set are willing to try new things.

Visit Farm Girl’s website for upcoming locations. Thanks to Renée S. Suen for the sketch pictured at the top, and Elise Bolger for the photo of Farm Girl Mobile Food Co.’s truck.