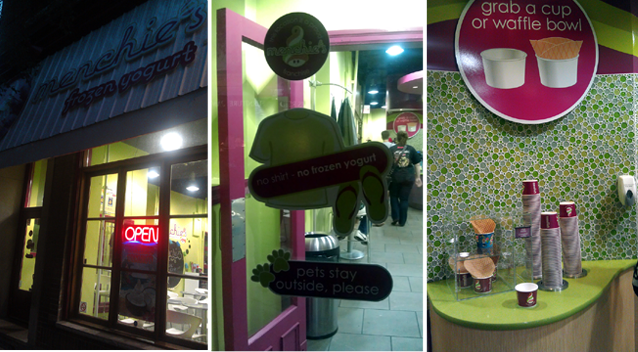 Within the past year or so, the section of Princess Street contained by Clergy and Sydenham has become home to three distributors of sweet and delicious treats: Cold Stone Creamery, SPIN! and Menchies. Since then, I’ve started to refer to this block as the Dessert District, and until earlier this week, I managed to resist the temptation of all of these new additions. Frankly, I’m not really a dessert person.  When faced with the option of an extra helping of the main course or some sort of sugary-sweet concoction, I tend to lean towards the former.  Does that mean that I dislike dessert, or am not the best person to review a place such as Menchie’s?  Hardly!  I prefer to think of myself as someone who will splurge given the right temptation.

Having successfully made it through one heck of a hot summer without having a single scoop of ice cream, gelato, frozen yogurt (froyo) or a freezie, it was high time to see what all the fuss surrounding Menchie’s was about.

Menchie’s enjoys a large storefront on the corner of Princess and Sydenham. On the Sydenham Street side of the house they offer a spacious outdoor patio where you can sit and enjoy your frozen treats and watch the world go by. Inside, you’ll find well over a dozen flavors of froyo, which they change up on a daily basis.  This is a key piece of information to consider, as Menchie’s might not always have your favorite flavors on tap. With classics including: chocolate, vanilla and cookies and cream offered alongside inventive options such as: red velvet cupcake, fresh baked snickerdoodle, fresh shredded coconut and all the rest, Menchies offers a wide array of non-fat, low-fat, no sugar, low carb and certified Kosher froyo.

Not sure what type of froyo is right for you, or simply want to try out one of their stranger concoctions? Menchies encourages you to try before you buy by providing little disposable cups to sample until you’re ready to make a decision. Any why not try a little bit of everything when the samples are free? 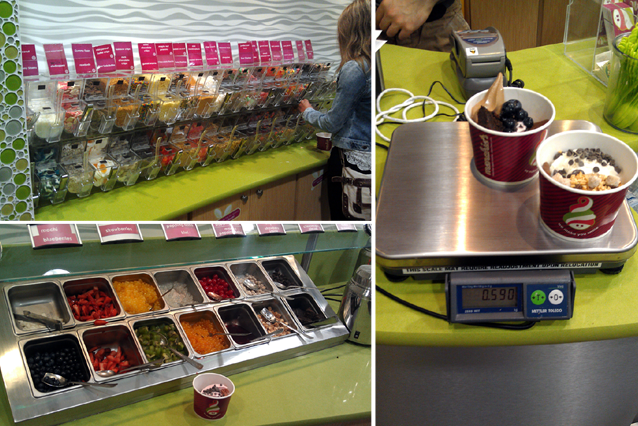 Once you’ve decided between a regular or a waffle bowl, you get to approach the large and exciting bank of froyo dispensers. Each unit dispenses two individual flavors (ie chocolate and vanilla) as well as a swirl that combines the two. As customers are in charge of dispensing their own froyo, you can combine flavors to achieve whatever blend or mixture you desire.

After you’ve got the right mix, you can walk (don’t run) over to the toppings station, which offers everything, and I mean everything, your mom told you to stay away from. Gummy worms, sour keys, granola, toasted shredded coconut, chocolate chips, miniature chocolate bars, fresh fruit, cheesecake and brownie pieces, syrup, sauces and much, much more. I originally thought that I would try a nude Menchie’s, but after all the sampling and with due consideration to the flavors I selected, I couldn’t resist adding a few additional treats to my bowl.

Having spent nearly 5 minutes creating the perfect chocolate and raspberry concoction, I was ready to checkout and enjoy my first real spoonful. Menchie’s charges customers based on the weight of their froyo, which is a pretty respectable concept. Essentially you pay for what you think you can eat – don’t let your eyes get bigger than your stomach. You can walk in on any given day and grab a little taste to tide you over and pay next to nothing, or load up, as we did, and pay about $6.50 per person. The price per portion might be slightly higher than what you’d pay at the likes of Dairy Queen, but it’s on par with local competitors such as Cold Stone and White Mountain. Oh, and that first spoonful? It was exceptional! 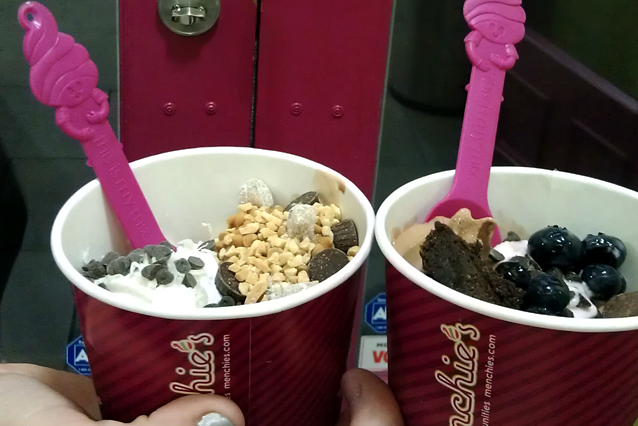 Menchie’s self-serve scheme allows customers to play in a dessert-centric kitchen, where treats are limited only by your imagination and willingness to experiment. The company has been rapidly expanding in Canada and beyond, with a plan to have more than 2,000 stores worldwide in the next 20 years. That’s a rather lofty goal for a company who only opened their first store back in 2007, and presently has between 250 to 500 stores open or otherwise in development. Froyo, similar to gelato, satisfies a niche market. You either like it and seek it out, or you don’t. The buzz around Menchie’s has reached a feverish pitch in Kingston, but given that our local franchise is the only one between Toronto and Montreal, our froyo depot is bound to continue to be a popular destination for locals and visitors alike. While I can’t picture myself there on a cold, wintery night, I’ll definitely keep this place near the top of my list next time there’s a heat wave or reason to celebrate.

One thought on “Menchie’s Frozen Yogurt”