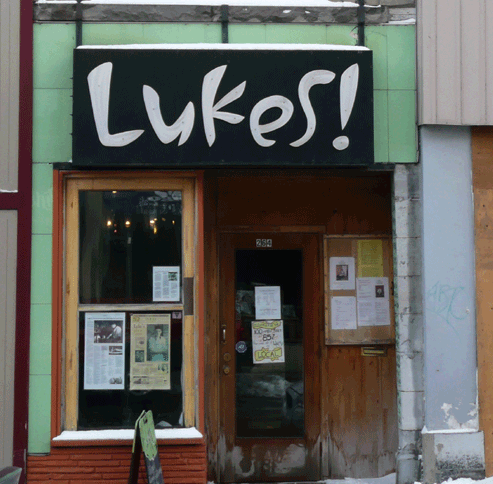 Luke’s Gastronomy is permanently closed. Looking for a place that’s still open? Check out our restaurant reviews and recommendations for establishments that are still open and serving great food in Kingston.

When you hear the words “Master Chef” the mind tends to conjure images of an older man or woman, probably in his or her 50s or 60s – someone who has had decades of training from top chefs all over the world. One would never suspect that the master of gourmet could be a seventeen-year-old. We were shocked when we stumbled upon this fact during a recent visit to Luke’s on Princess Street.

The restaurant was opened in 1993 by Carrie Hayes and Rob Alexander and named for their then 18-month-old son, Luke. Luke grew up working various jobs in his parents’ business and at age eleven he announced that he wanted to cook. His parents responded with approval and encouragement and he began working in the kitchen immediately. At 15 he took over the menu entirely.

Luke is now considered a master charcutier which means he really knows how to prepare meat, from doing his own butchery to making pates, confits, sausages, prosciutto and his own salami. That’s the short list. He is also known for his superb pastries and beautiful bread. The teenager has been reviewed and praised by major newspapers around the area.

Luke is now only 17 and is aspiring to be one of the finest chefs in the world. He also has more global dreams of bringing delicious and healthy food to children on a daily basis through a foundation that he plans to one day start.

Luke’s is a beautiful dining experience regardless of his age and is well worth a taste. Learn more about Luke and his restaurant at www.lukesgastronomy.com

One thought on “Luke’s Gastronomy”