Skip to content
April 12, 2010September 21, 2015 Harvey Kirkpatrick
Limestone Garden Grill is permanently closed. Looking for a place that’s still open? Check out our restaurant reviews and recommendations for establishments that are still open and serving great food in Kingston. 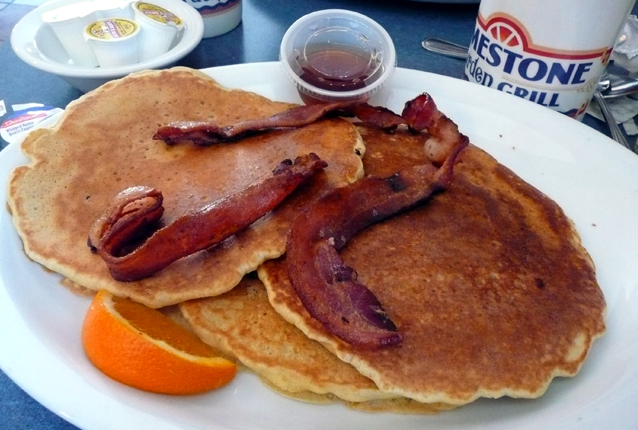 It’s been nearly 7 months since we last ventured out on an early morning search for sustenance in the name of Kingstonist. This past weekend one of our followers on Twitter mentioned that we had to try out the Limestone Garden Grill, but not because they do amazing pancakes and bacon, rather the recommendation boasted the Grill’s gourmet pizza. Now it should come as no surprise that I’ve had both thin crust and deep dish for breakfast more times than I can count, however yesterday’s meal featured traditional breakfast fare.  Pull up a chair as we try out something new.

The Limestone Garden Grill is located on the corner of Bagot and William, far enough away from the Queen’s Village Ghetto, but close enough to qualify as a haven for hungry students in the know.  It is also a stone’s throw away from many upscale bed and breakfasts, and removed off of the beaten path so you aren’t going to encounter the same congested crowds as breakfast nooks located along Lower Princess Street.  When we arrived on Sunday morning, I was both thankful and surprised that the place wasn’t jam packed.  We were given our pick of where we wanted to sit, and soon thereafter we were presented with menus, coffee and OJ.

As we sat and waited for our orders to arrive, we marveled at the various paintings that were for sale and on display.  Not only did the canvasses brighten up the space, but the few Kingston-centric pieces served to proudly reflect the local community.  With exposed limestone throughout, local pottery for sale, as well as a gorgeous looking bar, the Limestone Garden Grill provides a clean and cozy atmosphere that will put you at ease.  It’s a nice change when you enter a diner where you don’t want to order, eat and leave as fast as possible.

Our orders of pancakes ($4.99) and bacon ($1.50), as well as a custom-built omelet with home fries (9.75) and sausage ($1.50) took about 15 minutes to prepare.  The one page breakfast menu at the Limestone Garden Grill consists of pretty standard selections, and as I’ve indicated, the prices are outstandingly easy on the pocket book.  Our meals were hot off the stove, and they tasted better than what I’d come to expect at other local greasy spoons.  My wife remarked “this is how bacon should always be served” after taking the first bite of the crispy side order.  I was equally as impressed with my omelet, however I thought that the portion of home fries was a bit lacking.  That said, in the end, neither of us could eat another bite, so the overall portions are definitely filling.

While we’ve reviewed a handful of other breakfast destinations including Serves You Right, Peter’s Place, Morrison’s, The Jiffy Grill and Megalos, I can honestly say that my experience at the Limestone Garden Grill is enough to place it in the top three.  The convenient, just far enough away from the downtown, location made it easy for us to walk to, and inspired us to wander throughout the neighborhood afterward.  This place also earns high points for cleanliness and atmosphere, food quality and affordability.  It is interesting to note that the Limestone Garden Grill has a convenience store attached to it, which they’ve cleverly incorporated into their take out menu.  Good to know next time I have a hankering for pizza and laundry detergent.  I’ll be back soon enough to try out their ‘za, but in the meantime, I recommend that you pay them a visit for brunch.

One thought on “Limestone Garden Grill”